What are the names of all the parts of Harry Potter

From the date of the publication of the first novel Joanne Kathleen Rowling's "Harry Potter and the philosopher's stone" June 30, 1997 and for 10 years, the world has embraced real "pottermania". However, books on the adventures of a young wizard and his fight with the powerful villain Volan de mort still cause a keen interest in the young and adult reader. Just a series of Harry Potter includes 7 books on the seven years of his education at Hogwarts, a unique school of witchcraft and wizardry. 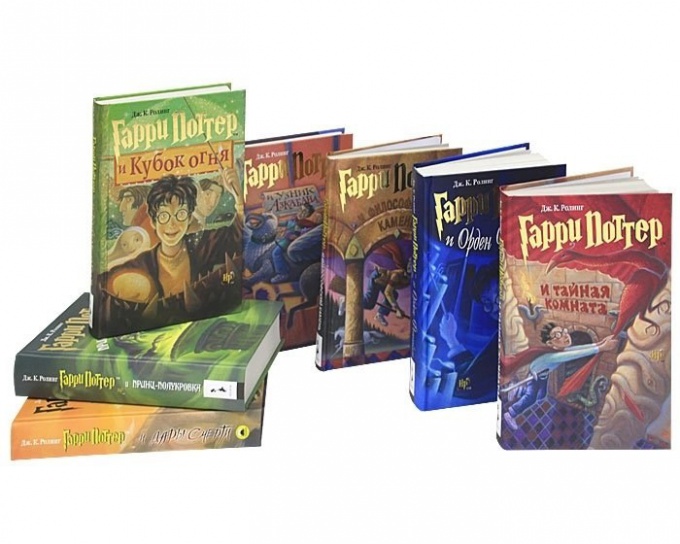 Related articles:
Instruction
1
Novels about Harry Potter has incorporated several genres, including fantasy, family, reading detective and romance. She says Rowling, the main theme of the novels is death, despite the fact that they were originally seen as children's stories.
2
First book of the series "Harry Potter and the philosopher's stone" is really the closest thing to a fairy tale. You can learn from it about the origin of Harry, his not too happy childhood in a family of relatives the Dursleys and early learning in the school of Hogwarts. In the book Harry finds his best friends are snooty and not very lucky Ron Weasley and smart, organized Hermione Granger. Here begins the first adventure, which, fortunately, ended well.
3
The atmosphere of fear fills the second book "Harry Potter and the chamber of secrets". This time, Harry and his friends have to deal with some unknown force, eventually caught the sinister Basilisk living in the chamber of secrets at Hogwarts. Here Harry, at first not realizing it, penetrates into the secrets of the past Volan de mort, appearing before him in the guise of a teenager Tom Riddle.
4
The third book is called "Harry Potter and the prisoner of Azkaban". In it Harry first encounters with the terrifying Dementors, sucking out of the man all the joy, save us from the death of a hippogriff named Buckbeak, and – most importantly – he met with his godfather Sirius black. Unfortunately, the Sirius on the basis of false accusations 12 years spent in the terrible prison of Azkaban, are still considered a criminal and forced into hiding from persecution.
5
"Harry Potter and the goblet of fire" is a story of growing up, first love and, unfortunately, this tragedy at Hogwarts. Resurgent Volan de mort, with the help of magic, forcing Harry to participate in the "Triwizard Tournament", in the final, where the winner prepared a deadly trap. However, contrary to expectations of the dark Lord, in the tournament winning two – Harry Potter and his successful rival in love, beautiful and noble Cedric Diggory. As a result, instead Harry killed Cedric. The finale of the "goblet of fire" becomes a turning point for the entire series: from this moment it acquires a tragic tinge.
6
Subsequent novels in the Harry Potter series is devoted to the events of the Second war of Wizards, which begins after the return of Volan de mort. Before the reader runs a chain of deaths of favorite characters. In the fifth book – "Harry Potter and the order of the Phoenix" dies Sirius black. In the sixth "Harry Potter and the half-blood Prince" - death takes the head of Hogwarts – the wise and powerful Albus Dumbledore.
7
The final book of the series – "Harry Potter and the Deathly Hallows" - is devoted to the final battle for Hogwarts, claiming the lives of noble werewolf Remus Lupin and his wife Tonks Nymphadora and one of Ron's brothers Fred Weasley. In the final Harry manages to destroy the dark Lord. In the epilogue, the reader sees the grown-up characters – Harry, Ron, and Hermione, accompanied their children to study at Hogwarts.
8
All the novels about Harry Potter have been filmed, becoming the most profitable film series in the history of world cinema.
Is the advice useful?
See also
Подписывайтесь на наш канал