What was the name of all of the Bremen town musicians 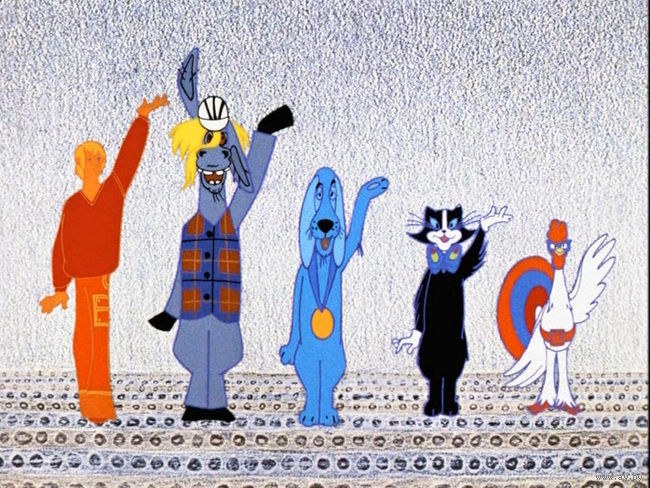 Related articles:
Instruction
1
Troubadour. This is the main character of a famous tale. It is characterized by the courage, tenacity and lack of discouragement. Troubadour for the entire cartoon trying to reunite with the king's daughter. Its prototype was a dandy of a fashion magazine. In 1969, when he published a cartoon image of a man in flared
governmental trousers and have hair like all the Beatles fans were the most appropriate. Voiced musician Oleg anofriyev. He sang most of his parties.
2
Donkey. The name of the Bremen town musician does not reflect personality traits. The donkey had a different nickname but refer neporotovo animal. But in the cartoon he showed himself as a bright and creative rock artist. Its prototype was the famous musician and singer Alexander Gradsky. His genius as a master of scene put in the episode a concert in the king's court. There was shown a cover of lullaby.
3
Cock. The character name corresponds with the name of a bird. He didn't have a creative prototype, and he showed himself as a silent hero, only occasionally behaving actively. But if the heroes got into trouble, the Cock is always rescued them, taking advantage of the ability to fly and cunning.
4
Cat. Hero Cat from Bremen, which is so called in the cartoon and book, something reminiscent of the Soviet animation of Puss in Boots. He's as energetic and cheerful. It is immediately evident that he's a drifter who knows how to stand up for themselves. This vivid and memorable character.
5
Dog. Few of the Bremen town musicians name was special. The dog also had nicknames. It was a very sad cartoon character. But despite the discouraging events of his life, he found true friends and companions, with whom he was not so sad. This character is masterly plays the guitar during the whole animation.
Note
Except the musicians were and the other characters, whose prototypes have become real people. So, the Princess reminded the wife of the poet Yuri Entin and appearance and in character. Her dress was chosen in fashionable models from a fashion magazine. A trio of robbers was in line with Nikulin, and Morgunov Vicino. Their characters are so consistent with the Coward, Bobby and Experienced that the similarity was not necessary to doubt.

The authors of the cartoon was the idea to give names to all the animals from wandering musicians. But they soon abandoned this venture just by making the names of animals with proper names.
Is the advice useful?
Подписывайтесь на наш канал