What prayers should be read before communion

An Orthodox Christian, sees the sacrament as an obligatory sacrament for the spiritual purification of his personality. According to the teachings of the Church, in the sacrament of communion man mysteriously United to Christ. Therefore, the Orthodox canons require mandatory training of a man to meet God. 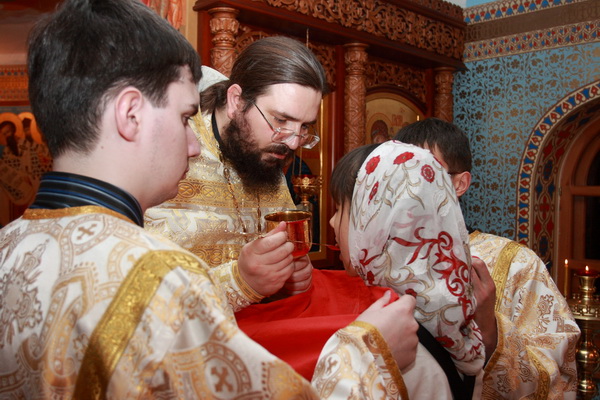 According to the canons of the Orthodox Church before communion a believer must fast three days. In addition, the Christian must try to avoid scandals, conflicts, and convictions of other sins. Also mandatory in the preparation for the sacrament of Holy communion is the recitation of certain prayers.

All three days of training Christian needs to read morning and evening prayers. They are found in any Orthodox prayer book. In addition, required are the canons to Jesus Christ (repentance), to the Mother of God (prayer), guardian angel, and the service for Holy communion.

Often Orthodox people interpret the canons to the Lord, the Theotokos and the guardian angel before the evening worship service. After the service, the person confesses. Arriving home, the Christian reads the first part of the successor to the Holy communion, which is written in the Canon before Holy communion. All of this can be found in the Orthodox prayer book. Before bed to read the evening prayer.

In the morning a Christian reads the morning rule, and also the prayer before Holy communion (everyone is in the Orthodox prayer book). Only after this man is sent to the service for the sacrament of Holy communion.

Sometimes three reads Christian Canon and the first part of the following before communion the evening before the sacrament after confession. At the same time, morning prayer and prayers for the communion shall be deducted immediately before the Liturgy. There is another practice subtraction prayers for those who find it difficult to read large volumes. So, throughout the three days of preparation the people daily reads, one Canon (the Lord, the Theotokos and guardian angel), and all the service for Holy communion (Canon and prayer) reads in the morning before the Liturgy.

You need to understand that there is no clearly defined time frame for the reading of prayers before communion. Importantly, the rule was deducted immediately before the divine Liturgy, where a Christian wants to take communion.