What is the fastest way to level up in WOW

In World of Warcraft Mists of Pandaria was raised to the maximum level a player character to 90th level. In this regard, the pumping began to take even more time. Spending 2-3 hours a day and prokatilas only on quests, 90-th level is obtained for two or three weeks. There are several ways to reduce this process to 2 days, or even less. 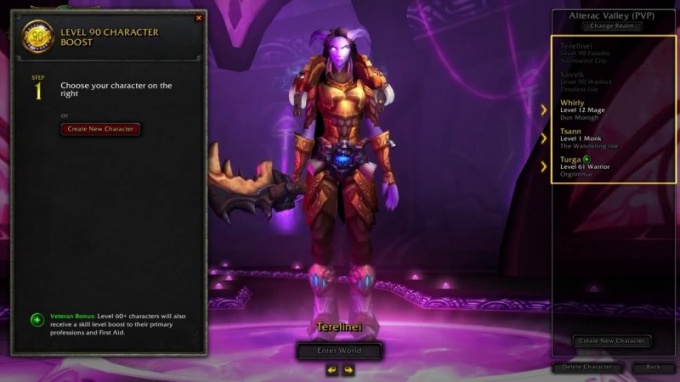 Pumping through the store battle.net

Blizzard not long ago introduced a new in-game service "level to 90". It costs 2000 rubles. Payment is made through the store battle.net directly in the game. You must Fund your wallet account by a corresponding amount. After that, start WoW and enter the character selection screen. In the lower left corner click on the "Shop", choose "Services" and complete the payment. Then click on the character whose level you want to raise, and execute a number of actions, such as choosing a faction (the Pandaren), specializations and talents. When you are finished leveling up, the character will not only be the 90-th level, but will be dressed in the appropriate gear that will allow you to easily engage in battle.


In addition to WoW temporarily has the opportunity to raise the level of the character. For this, you need to subscribe and to execute in advance of Warlords of Draenor, which will be released no later than 20 December 2014.

Create a race and character class

As no surprise, but even at this stage you can get some bonus to the pumping level. If you don't care how it will look in character, it is best to swing a Pandaren, unless, of course, in this race there is a class. Pandarus has an internal harmony, which doubles the number dialed experience of cheerfulness.


If you decide to create the character class "monk", keep in mind that once a day you can complete the quest "Through practice to perfection", the completion of which is imposed on you spell "Enlightenment". It works for 1 hour and increases the number of recruited 50% experience.

Joining a Guild 25 level, you will automatically receive a bonus of +10% experience. Don't worry, as a rule, a Guild hunt for a novice, so, when first entering the game, you will surely get several invitations. If not, then open a tab with the Guild and request to join to some Guild 25 level.


Also have inherited the ring (+5%), which obtained victory in RYBARENI.


All these items are account bound, so you can freely transfer between your characters.

Elixir of ancient knowledge gives a bonus +300% for 1 hour. It stands out with a rare mob Krol Blade with chance 10%. He reshaetsya once in 20-40 minutes. At the same time wanting to elixir quite a lot, so you have to spend hours camping barefoot and trying to kill him the first to get the loot. Also this item drops from elites Bishop the Flames with a chance of 2%. He is on the Timeless Isle.


Festive bundle, which gives +8%. To obtain this buff only during the celebration of the anniversary of World of Warcraft.


Cylinder Darkmoon Carousel or Darkmoon faire gives a bonus +10% experience. To get it, you can either ride the carousel, or buy a cylinder from a dealer for 10 coupons. Bonus is only available during the Darkmoon faire.


Battle standard of coordination you can buy in the Guild shop when you reach the reputation level of "Friendliness". It gives +15% experience for killing mobs. Has a limited area of action, therefore, moving around locations, have to rearrange.
Is the advice useful?
Присоединяйтесь к нам
New advices