How to turn on a beacon in Minecraft

The lighthouse is a special block in the game Minecraft that can have on players positive effects under certain conditions. To enable the beacon it is necessary to collect a fairly large amount of resources. 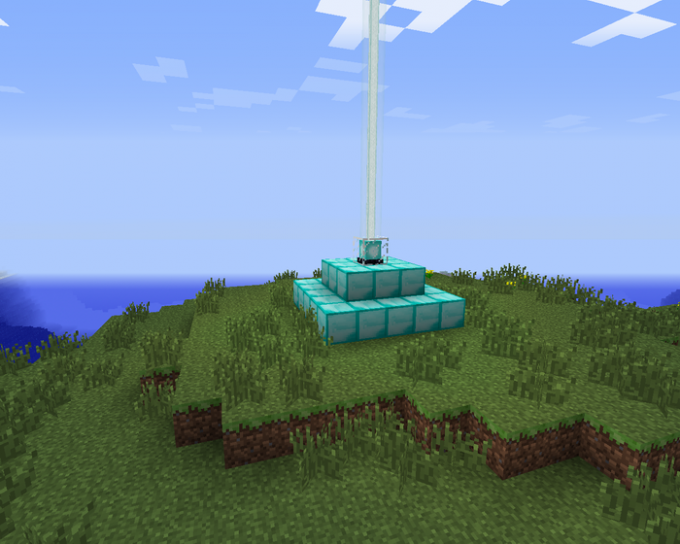 The principle of construction

To the beacon, under it it is necessary to build a structure in the form of a pyramid, its size depends on the number of effects and impact of the lighthouse. Besides the above the unit of the beacon should be no opaque blocks, otherwise it just will not turn on.

The pyramid under the beacon should consist of specific units. These can be blocks of iron, diamond, emerald or gold. In one pyramid, you can use the blocks of all four types, it will not affect the final effect. After the installation of the beacon on the top of the pyramid from it will emerge a very bright column of light. The higher the pyramid, the stronger will eventually be a lighthouse.

To gain access to all possible effects, it is necessary to build a four-storey (excluding the lighthouse) pyramid. The first layer must be a rectangle 9X9 blocks, the second — 7X7, third — 5X5, fourth — 3X3, as fifth level (size 1X1) used the lighthouse itself. To build this pyramid you will need 164 blocks. Note that one block consists of nine units of each resource, that is, one iron block is composed of nine iron ingots, and one diamond block of the nine diamonds so that the maximum resources in the pyramid will go quite a lot. You can build a two-level pyramid with the base of the 3X3 block, but the effect of such a beacon will be much less.

The inclusion of the lighthouse

After the installation of the lighthouse click right mouse button. In the appeared empty cell you want to place one of the following items — a gold or iron ingot, diamond, emerald. This will open a list of available effects, which depends on the height of the pyramid, it is necessary to choose one of the options.

The effects imposed on the player last for a finite time. If the player does not depart from the pyramid beyond a certain distance, this effect can last indefinitely, periodically resetting the counter. For a single stage of a small pyramid, this distance may not exceed 16 units, for two-stage — 24 for the three speed — 32 and for the biggest four-speed — 40. It is worth considering that the payment is accepted and the distance at altitude.

On multiplayer servers the effects of the lighthouse are given to all players in the radius of the pyramid, such beacons are often installed at the zero coordinate at the point of entry into the game.
Is the advice useful?
See also
Подписывайтесь на наш канал