How to present the team of KVN

Playing in KVN has not lost its relevance and is only getting more popular year by year among the students. The reason for this may be that it implements almost all of the talents and dancing and singing and sparkling humor. The view command occurs during the so-called "Cards" - one of the contests of the game in KVN. 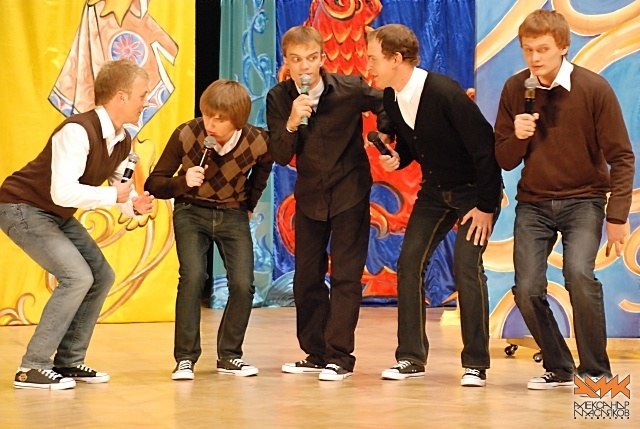 Related articles:
Instruction
1
Gathering a team of like-minded people, learn how to better you to act? More successful if each player will choose a role that will stick throughout the season. Someone can be a "nerd", someone with soul, someone a sex bomb. List the characters and phrases that he can speak. So the scenario cards to work will be much easier.
2
Your team should not be too large. Five people on stage is more than enough. You will also need a sound engineer and stage props. The last two people behind the scenes, but also have important functions. The sound engineer needs to choose and cut "skips" - a brilliant short excerpts of well-known songs that are included after every joke to increase the effect, and find the backing tracks for "sunset" and the final song. All records should be arranged in chronological order. On the speech sound will include them in accordance with prescribed timing.
3
The prop must not only choose the suits in accordance with the role of heroes, but to make the necessary props and maybe even a screen, if necessary. Costumes you can sew it yourself or hire a theatre. As for the other things involved in the scenes, something you can buy, and something to do in the form of models, drawing on paper or making in the technique of "papier-mache".
4
The simplest version of the script for the performance of the team is to describe the nature of each team member and show a short humorous excerpt from his life. In order to find a response and understanding from the audience, include in the script a few scenes depicting life in your school. At the outset it is necessary to make "sunset". They can serve as a song about the team or the short dance. In the end decided to sing a song, the meaning of which is that the audience supported the team. At the end of his speech, don't forget to thank those team members who remain behind the scenes.
Is the advice useful?
Присоединяйтесь к нам
New advices