What presidents are on which dollars are depicted

Many people know that the dollars are depicted outstanding presidents and statesmen of the United States, but not everyone knows what it is people are immortalized on U.S. currency. The design of the majority of dollar banknotes are designed and approved in 1928 and since then has not changed much. 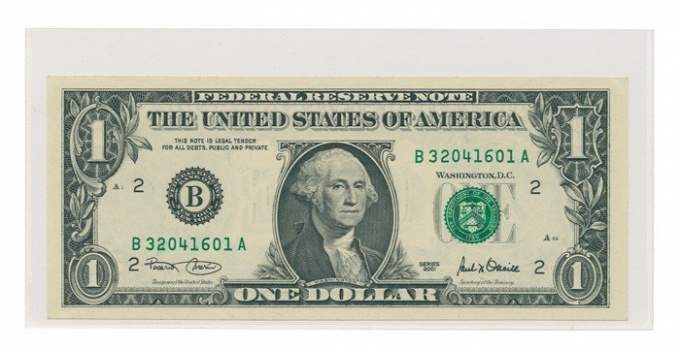 Related articles:
Instruction
1
On your dollar bill depicted George Washington – first US President, who held the post from 1789 to 1797 years a prominent figure in the first American bourgeois revolution, commander in chief of the army during the war for independence. Washington distinguished extraordinary honesty in dealing with people. The same President pictured on the coin in 25 cents.
2
On the banknote of $ 2 depicted the third President Thomas Jefferson. This honor he received as an active leader of the first American bourgeois revolution, a prominent politician, diplomat and philosopher. One of the first he developed the doctrine of separation of Church and state. By the way, this same man immortalized on a 5-cent coins.
3
On the 5-dollar bill, painted a portrait of 16th U.S. President Abraham Lincoln, during the reign of which in America slavery was abolished and blacks had freedom. Despite the fact that African Americans gained equal rights with white only in the second half of the XX century, the beginning of the process of their release was laid under Lincoln. In addition, during the civil war of 1861-1865 that is Lincoln directly led troops of the Confederation, and led them to victory. His portrait emblazoned on the coins of 1 cent.
4
On 10-dollar banknote is a picture of Alexander Hamilton, the first Secretary of the Treasury, a great statesman, ideologist and leader of the Party of Federalists who stood at the origins of its creation. Developed a program of accelerated commercial and industrial development of the United States, Creator of the American currency – the dollar.
5
The banknote of 20 dollars decorates the 7th US President Andrew Jackson, along with Hamilton is considered the founding father of the dollar. The founder of the democratic Party, the first Governor of Florida. Interesting fact: Jackson was a staunch opponent of paper money and National Bank. Now the 20-dollar bill with his portrait counterfeited most frequently. Although in different years his portrait was printed on the bills in 5, 10, 50, 1,000, and 10,000 dollars.
6
50-dollar bill bears the portrait of Willis Grant, 18th U.S. President, civil war hero, political and military leader. During the Civil war commanded the troops of the northerners, was promoted zo the title of General of the army. In 2005 the idea was born to replace Grant on the banknote image of Ronald Reagan, but for various reasons the idea was never completed
7
Banknote of 100 dollars is decorated with a portrait of Benjamin Franklin, the leader of the war of independence, scientist, publicist, journalist, publisher and politician. Franklin the only statesman of the United States, whose signature is under the three most famous American documents – the Declaration of independence, the Constitution and the Treaty of Versailles 1783 by the Way, Benjamin Franklin became the first American accepted to the Russian Academy of Sciences as foreign member.
Is the advice useful?
Присоединяйтесь к нам
New advices