How to distinguish original Swatch watch

Swiss watches, known for their high precision and unmatched quality, is considered to be a luxury for the few. In Switzerland create the famous Breguet, Patek Philippe and Chopard hand-built. But apart from luxury brands, is only available to very wealthy people, selling it is easy to find a reliable and stylish watch by Swatch and Flic Flac that are affordable even for students. 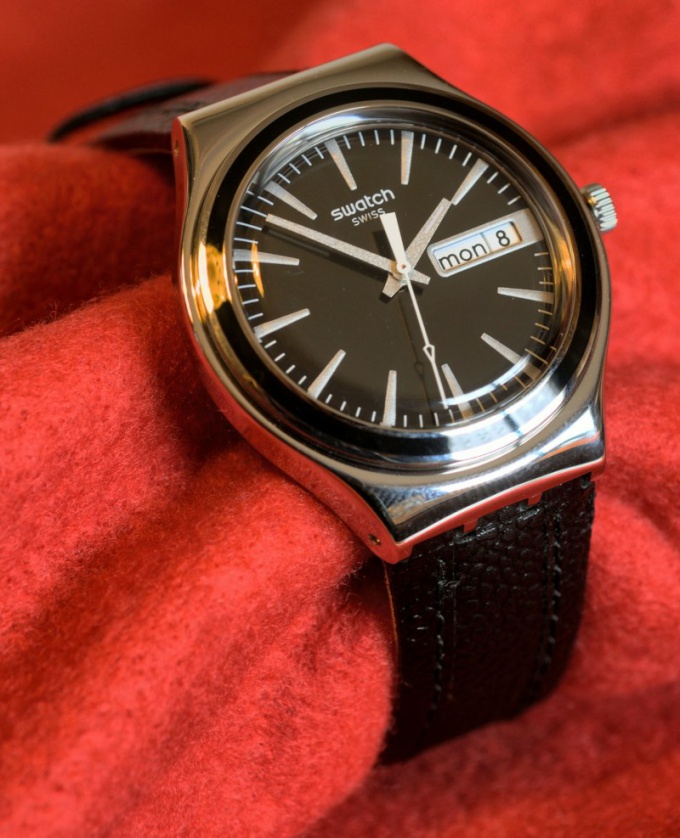 70-ies of the last century was difficult for the Swiss watch factories. At this time, the Japanese began to produce cheap quartz watches, has won huge popularity due to availability and modern design. The oldest shop Switzerland, where they still practice hand-built to achieve the highest accuracy the device could not compete with the East because of high costs and a conservative the performance of their models.

Then Swatch released a watch with ultra-thin dial — Delirium. Their basic difference consisted in reducing the number of parts, thereby reducing the complexity of Assembly and production costs. The thinnest watches in the world Swatch Skin — also the brainchild of the Swiss group, still popular around the world.

The core of the brand consists of four lines:
1. Original classic model with a round dial and conservative in design;
2. Skin — ultra-slim elegant watch, mainly for women;
3. Irony — metal housing, made in classic, minimalist and even sporty style, with additional features (chronometer, calendar, tachometer);
4. Digital — tech stylish device with an LED display and backlight.

In addition, the plant produces seasonal and special collection dedicated to the holidays and other events. All Swatch models, including discontinued presented on their official website, there you can find the detailed specifications and user manuals for each of them.

On the original dial Swatch there is a corresponding inscription, signature font. Notwithstanding idle's opinion, the coating of the dial is not as resistant to scratches and shocks because it is made often from inexpensive Plexiglas.

The material of the strap, it is easy to determine the cost of Swatch models: cheap are sold on the bracelet leatherette, plastic, or silicone; a more representative — on leather or metal.

All Swatch watches waterproof but are designed for different pressure. Cheap models are not allowed to remove during washing, bathing or washing dishes. For scuba diving you need to find a device with higher rates.

First, you will receive a unit certificate and warranty card for 2 years. Any manufacturing defect will be rectified in the service center, but if fix is impossible, the watch will be replaced by a similar but good quality.

Second, the company takes care of the batteries and polishing the glass of the dial to Shine. If you buy a watch with hands, you will have to care for them yourself.

Thirdly, the only way you can 100% be sure of the authenticity of Swatch watches.
Is the advice useful?
See also
Присоединяйтесь к нам
New advices