Pioneer organization was a rigid structure. "Primary organization" was to link the units together in squads, squads – in squad. Each division should have a name and motto. 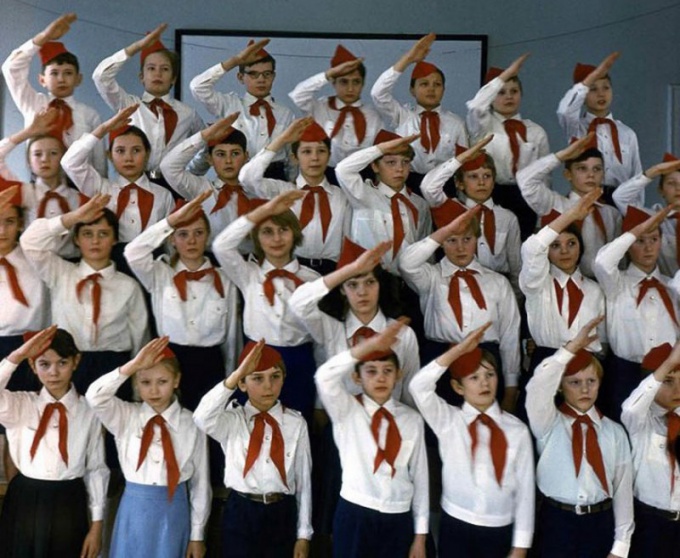 The motto had come in meaning to the name of the squad or squads. Very often the pioneer Association was called by the names of the heroes of the civil or the great Patriotic war, the famous military units, workers, workers, astronauts, and scientists. Name is not assigned immediately, first squad had to fight for it, and it took some time. Therefore, in pioneer camps existed other names, often stars or flowers. But there were "Romance", and "cabin boy", and more. The slogan is often chosen phrase from a literary work or film. Popular pioneer mottos;
- "The spark will kindle a flame";
- "To strive, to seek, to find and not to yield";
"Eaglets learn to fly";
"And on Mars will be Apple blossom";
- "Always forward, not one step back";
- "To Shine always, to Shine everywhere, to Shine - and no nails";
- "Space is our future".
The main motto was: "Pioneers! To fight for the cause of the Communist party be ready!". Every pioneer had to give a salute and reply "Always ready!". The motto was placed in the corner of the unit, next to the other pioneer emblems. On the rulers and fees replied in unison immediately after the title.

The motto was chosen at a General meeting of the squad or squads.

Pioneer slogans were a set of rules that had to follow every pioneer. These phrases were written on the posters, and to better remember them, and notebooks in the line, on the back cover. Sometimes it printed "a Solemn promise" - the promise that every child was given when he was tied with a red tie. Popular were slogans such as:
"Pioneer all the guys example";
"Pioneer is growing bold and not afraid of difficulties";
"Pioneer tells the truth, he cherishes the honor of his party":
"Pioneer is friends with the children of all countries of the world";
"We, pioneers of Soviet country, the glorious tradition going right."

The slogan was supposed to be short, clear and memorable.

The slogans said during the campaigns and at exhibitions building and songs. They helped to keep up and to stick to a certain rhythm. They are usually invented by the participants themselves. However, they remembered very easily, so the pioneer, after returning from camp, it could learn with her high school squad any slogans. He started to say usually the one who had the most sonorous voice, and then responded the whole party. "Solo" and "chorus" alternated. It looked like this:
One, two!
Three, four!
Three, four!
One, two!
- Who walks amicably abreast?
- Pioneer our group!
We the guys-well done,
Pioneers-Leninists!
The vast majority of chants started from the account to set a marching rhythm. On the review system and songs after the chants are usually followed by a song. Almost always leading and soloist of the slogans was the same, the owner of a sonorous voice.
Is the advice useful?
See also
Подписывайтесь на наш канал