How to play the Board game "Businessman"

"Businessman" is an economic Board game that will teach you the basics of commercial activity. Her rules are fairly simple: throw the dice and move along the perimeter of the playing field, buying real estate or manufacturing companies and making deals with other players in the game. 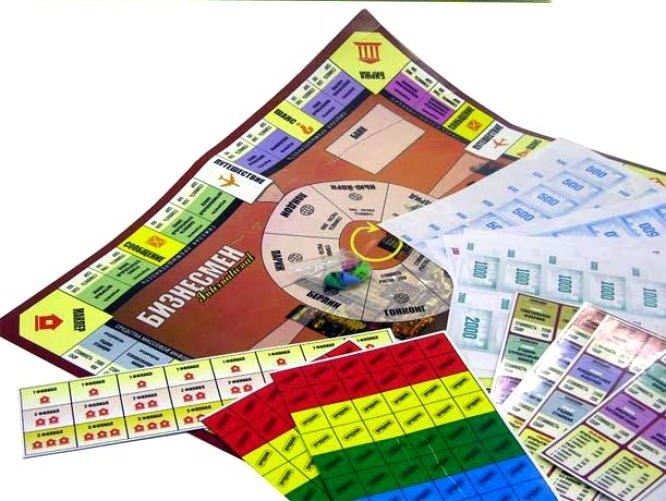 Related articles:
Board game "the Businessman" will help you to develop business skills and to acquire the skills of financial management. The game is designed for people of all ages. Even children can learn from her many useful things: to learn discipline, to pull account and develop memory.

Basic rules of the game

The goal of the game "Businessman" to take the greatest number of firms and businesses and destroy their competitors.

To participate in the game can from 2 to 6 people. Game details laid out to their proper position in the middle of the field. Promotions and cards with the names of the various firms are laid out on a specially reserved for them the cells of the playing field. The players choose their chips will receive 1 share of each colour and an initial loan of 250000 coins.

One of the participants of the game must take on the responsibilities of the banker. You must then distribute to the players for 3 large and 4 small cards "Exchanges". Determine who will start the game and set the sequence of moves. Then place all the chips on position "Start" and roll the dice. Fallen in the end the total points will determine how many cells will need to move the players first throwing dice. The next move will start from the place where his chip had stopped the last time. And so one by one.

In the course of the game proposals for the sale of, pledge, exchange and purchase of real estate will have to come from the player, whose turn came to throw the dice. Throughout the game the pieces can move around the perimeter of the playing field several times. Every time, after passing the position "start", the participant will receive from the Bank 20000 credits.

The cage, which stopped party game can be bought for a certain price (it is listed at the bottom of the card). It can also be sold to another player at a premium that will suit both.

The player in possession of an empty lot, must take on the title deed. To start building the plant, he will be able only after I buy all empty lots of the same color. On each plot you can build a first branch, and then the company, paying their price in full.

Chips branches and enterprises may not be enough for all players. In this case, you must wait until someone of the participants do not return them to the Bank.

The the opponent's area

If the player stands on a plot which already belongs to someone, it must pay the owner rent. Her prices are indicated on the plot. If the player has already collected all the plots the same color, the rent will increase in 2 times. The player can forget to charge the other party the rent before the next throw of the dice. In this case, the rent will not be charged.
Each player can make deals with other players in the game. Bought cells can be bartered or sold. So it will be easier to get a set of parcels of the same color to build on their companies and affiliates.

Cells of the playing field

Getting on the cells of "Surprise" or "Notice", you must remove the top card from the corresponding pile and perform the described acts. Then put the card under the pile. If you fall out the map "to Play on the exchange, keep it until the not follow this condition.

To be able to play on the stock exchange, you need to:

Got on the Exchange participant may purchase stock (4 of each color) and sell already existing securities to other players. The initial cost of the shares is 10,000 credits. One cell on Board "the stock Exchange" valued at 1000 credits.

Small cards are divided into two groups: those that reduce the value of the shares and those who, on the contrary, increase it. The player, who decided to increase the price of the stock the same color at the same time lower the cost of other shares for the same number of points indicated on the card.

The change in stock prices should be displayed on the scoreboard, "Exchange". It is necessary to rearrange the chips matching color on the amount of points that changed the initial value of the stock.

After changing asset prices, the player must pay the Bank the difference between their old and new value. This difference must be multiplied by the number of shares desired color.

The player presenting the card, which reduces the value of its shares, the Bank should pay compensation of the difference between the old and the new stock price multiplied by the number of assets corresponding color.

If the player, increasing the value of the shares has exceeded the maximum value on the scoreboard, his piece moves to the position 25. Other players in this case will receive compensation in the form of the difference between the maximum value on the scoreboard and the real value of the assets. Compensation multiplied by the number of shares of the same colour. For example, the old value of the shares is 23 points. The price increased by 10 points. While compensation will be 8 (23+10-25=8).

If the player lowers the value of the shares and thus goes beyond the lower limit on the scoreboard, as compensation he will receive only the difference between the old and new minimum price for them. For example, the old value of the shares amounted to 3 points. The player has lowered it by 5 points. His compensation in this case will be equal to 2 (3-1=2). The other players have to put in that amount of credit. When this chip is put on the minimum value.

If the stock decreased in 2 times, and their previous value was equal to 1 point, the player presenting these shares, compensation will not receive. Other participants will be required to pay to the Bank for 50000 credits for each share that color.

To pay fines the player should only cash. The funds that he invested in stocks cannot be used. If a player has no more available credits, and he needs to pay the fine, he should pawn or sell to the Bank their property.

The Bank performs the following functions:

- buys and sells stocks;
- gives the profit from the game on the "Exchange";
- gives winnings stock;
- provides loans and takes real players bail;
- transfers the funds across the border (with the cells 25 to 52).

Once the position is called "Hotel", the player can:

- to buy a firm abroad, throwing dice and making 1 turn on the smaller perimeter;
- to play roulette 3 times or exchange times 1.

To go to work abroad, you must pay the transition through customs in the amount of 10000 credits. In addition, you will need to sell to the Bank half their shares at their actual value. After crossing the small border on the perimeter of the field, you will be required to pay the Bank 5000 credits for every purchase made abroad.

Roulette can be played unlimited number of times. You have to go clockwise, starting with the position "Login". If you stay in the cage "In the Bank", you will get 200,000 credits as a reward. After that you have to get out of the roulette. You can also leave the game, stopping at every cell transition.

Traffic on the Expressway should go according to the numbers on the dice totals. If you get to the third cell on the motorway, you will be given 5 shares.
If you will be on the 5th and 6th cell, followed by a crash. You will be taken to the hospital and will have to pay for the treatment in the amount of 30,000 credits.

After stopping at the cage 8 motorway, you agree to pay to the Bank 1/2 of their money. But if you manage to get to the intersection, you will be able to return to the big perimeter, paying a minimum fee of 5,000 credits.

Once the position of "Supemarket", the players bring to the Bank to 20000 credits. You can also buy this land for 50,000 and to 75% of the profits from rent of those of its rivals, which falls into this area.

Undeveloped areas are allowed to sell at any time and in unlimited quantities. Buildings are sold to the Bank for half price.

If the player does not have enough credits, it may pledge their assets in the Bank. Mortgaged plots are not for sale. Maps of the mortgaged property turned over and placed separately.If after a full two laps around the large and small perimeters, the player does not redeem their property, it will take Bank.

If a player is unable to return the debt, he leaves the game, giving their property to the Bank. After that, the Bank must pay the creditors the amount owed in full. Card retired player can be bought by other players in the game.
Is the advice useful?
See also
Подписывайтесь на наш канал