How to enable airplane mode in Minecraft

Flight in the game Minecraft only on the "Creativity". It can be enabled via modification of client or server, but the owners of multiplayer servers rarely give the opportunity to players. 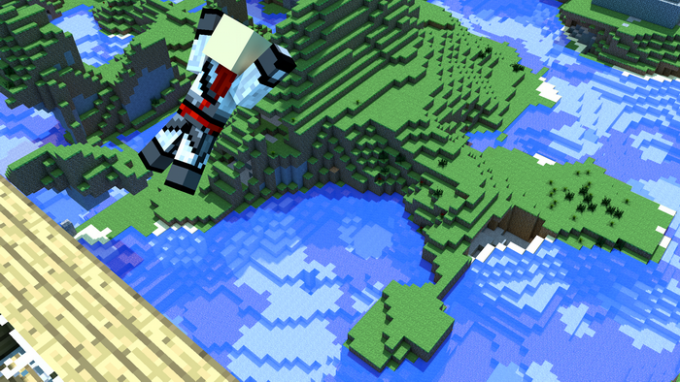 The benefits of flying

Flying faster running half. It greatly reduces the friction force, we can say that the flying character is slipping on the blocks as if he was on the ice. To fly while in the water (or under lava potion of fire resistance), the movement speed will gradually decrease, but fail to drown.

The flight time, unlike the time of the run, which depends on food depletion is not restricted. You can fly indefinitely. To enter airplane mode you can use double pressing jump. To increase or decrease the height of the keys can squat and jump, respectively. Double pressing the jump takes the player out of airplane mode.

If close to the character's head are any solid blocks, can be problems with entrance and exit airplane mode. To resolve such problems, it is sufficient to fall below or to destroy interfering blocks.

Airplane mode automatically turns off if the character touches the surface under the feet or just flying too close to it, this does not apply to liquid under my feet, but when flying over the lava you need to act with maximum caution, because accidental contact of the liquid leads to the ignition of the character. Of course, this applies only to flight in "Survival mode" with a modified client or server, as in the "Creativity" of the characters immortal.

Some of the nuances

In flight mode the range is increased by ten units. To understand whether you are in this mode or not, just look at the moon or the Sun, as their size is changed when you fly.

If you went to bed or sat in the trolley during the flight, after leaving them you will continue to fly.

On most servers not in airplane mode, so if your client is modified for flight and you use this in a multiplayer game, the server may just disconnect you from the game for a while or forever.

If your computer is not too powerful, the game can slow down when entering airplane mode and leaving it. To get rid of such problems, it is enough in the video settings to reduce draw distance, turn off clouds and other optional functions.

In the game the fastest you can move, if you drink a potion that increases movement speed, and then run (by double-clicking "go") and take off.

In some cases, too high altitude can slow down the speed of horizontal movement, quite a bit of decline, this problem disappeared.
Is the advice useful?
See also
Присоединяйтесь к нам
New advices