Alexey Kabanov turned to the Internet community with a request to find a wife, which, in his words, he left the house and never returned. It was later revealed that he killed her, then dismembered and scattered body parts around the city. 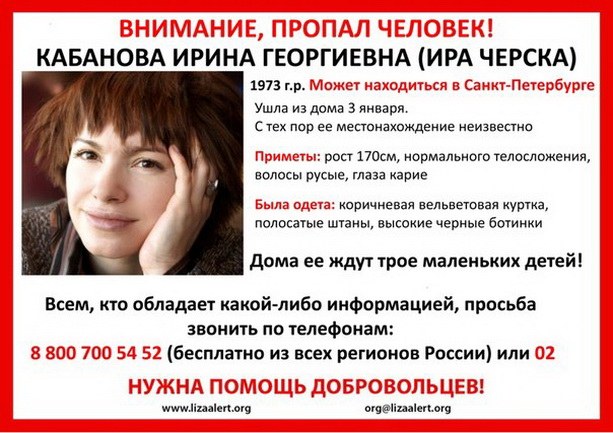 Related articles:
What is this cruelty, why a man, a father of two children and stepfather to another child, decided to take this brutal step? Affect or whether it is a symptom of a psychological disorder?

What happened in the family Kabanova

Alexey a day after the New year celebrations had a big fight with his wife. She learned about her husband's mistress, and she made a scene. Boar was not think of nothing better than to grab the wire from the speakers and put Irina on the neck. This was accompanied by a noise that came out of the bedroom the eldest child of Irene. Strangled wife, Kabanov took the child in and put to bed.

The boar killed his wife immediately, when he put to bed the son, and Irina was still alive but was unconscious.

About any strong emotional excitement such composure is not evidence, because after the husband returned the wife to finish and then completely dismembered her corpse. The boars tried to play the role of grieving husband and father, writing on the social network from your account that Irina may have left because of the passport he found.

Volunteers began the search, and Boars at this time slowly got rid of the dismembered body of his wife, borrowed the car with his mistress. The woman even had no idea what is in the trunk of her car. He was in no hurry, because I thought that in someone else's car remains nobody will look.

The true causes of the murder

Assessment of the actions of Alexey Kabanov gave expert, a psychiatrist who cooperates with law enforcement agencies, Mikhail Vinogradov. In his words, the Boar – the usual serial killer, caught after the first murder. His behavior is typical, as the maniac gets pleasure from the process and subsequent searches, he likes to be the star of the screen, behave on the verge of a foul, when at any moment it can open. Some criminals were able at this stage to escape justice.

A similar case was in Ryazan, when the groom killed the bride, and then searched for her all along, even the father of the girl has invited to itself to live.

Fortunate for society that the "grieving spouse" in time stopped. Analyzing the act, it is clear that the murder was prepared by Kabanova, neither of which randomness of the question. Depression from lack of money is not written off, as in such situations, after the murder of his family, places his hands on himself, or trying to do it. Here there are complacent, cynical Boar were transported fragments of corpse in landfills, and against the background of the car, in the trunk where lay the dead them wife, gave interviews to the media. It is a pity that after the first case he will not get a life sentence, and after some time will return to continue what has already begun.
Is the advice useful?
Подписывайтесь на наш канал