How to fry potatoes with rind

Fried potatoes, despite the high calorie content, can be found in the diet of many people. The secret of such popularity of this dish lies in the simplicity of preparation, the pleasant taste and aroma and crispy crust, which is obtained during the right Browning product. 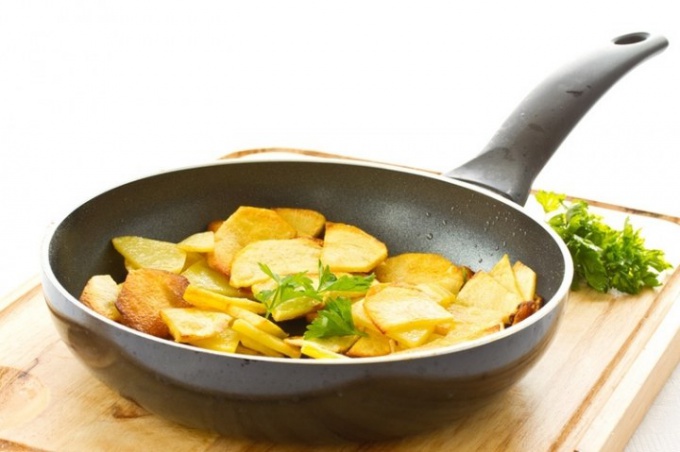 How to fry potatoes with a crispy crust

Peel the potatoes, cut into thin slices roughly the same size, put them in a colander and rinse under water to rid of excess starch. New potatoes before cooking is not cleaned, but only to wash under running water with a brush. Then lay the potatoes on a paper towel – it will absorb excess fluid, which can prevent the formation of crisp.

Select a pan based on the number of potatoes. The latter should be evenly distributed around the pan so that don could see the bottom, and at the same time, the layer of potatoes should not be too thick. In a frying pan refined oil and heat up it on high heat.

While the oil is heated, put the potatoes in a bowl, pepper it, add your favorite spices and a bit of Bay leaf, stir. Then a Bay leaf and discard, and potatoes put in a pan with hot oil.

Fry on high heat, constantly controlling the process. As soon as the bottom will be browned, stir the potatoes. You should not do it too often, otherwise you will not have time to form a crust. When potatoes become soft, add salt to taste, stir and remove from heat, spread on plates. Then sprinkle with greens and serve before it gets cold. It is very important not to overdo the product in the pan and not leave him in it after cooking, especially under the lid, then crisp will become soft and not so tasty.

What to submit fried potatoes

Fried potatoes with a crispy crust will seem even more tasty if to offer her appropriate foods. So, it goes well with vegetable salads of fresh tomatoes, cucumbers, various greens, cabbage or carrots. Perfect to soak up the sauce, for example, a Greek salad or appetizer of tomatoes and oregano. To prepare the latter, you need pink coarsely chop tomatoes, sprinkle with chopped oregano, season with salt and pour a large amount of lemon juice.

In the winter, to the roast potatoes you can put on the table a variety of pickles: cucumbers, tomatoes, pickled mushrooms, pickled apples or plums, sauerkraut. Of the latter, by the way, you can prepare the salad, mix it with canned peas, onions or green onions and unrefined sunflower oil.

If you want more hearty meals, you can bake in the oven for some red fish. Then fried potatoes perfect as a side dish.
Is the advice useful?
See also
Присоединяйтесь к нам
New advices