The medical profession is very often exploited in horror films. Extremely fertile topic! It is impossible to calculate how much was filmed thrillers where the main character was the mad doctor or the action unfolded on the territory of the clinic. Here's a selection of the most successful horror movies about doctors and hospitals, taken at different times, but which are impossible to watch without a shudder. 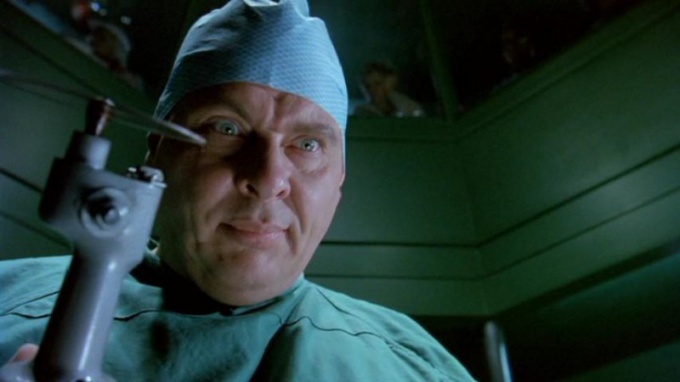 That European thrillers are sometimes striking in their sophistication, no doubt. Directors sometimes give out such masterpieces that have for so long can not recover. Depressing and leaves the viewer a few days. A striking example is the film by Dutch Director Tom six's "the Human centipede" (2009). Crazy doctor puts his inhuman experiment, which kidnaps three young people. This film some of the audience could not even watch it to the end, so some of the scenes in it are disgusting.

"Hypnosis" (2010), manufacturing of Spain. The focus of the psychiatric clinic, where patients treated with hypnosis. A young doctor, she gradually begins to realize that the hospital where she works, is fraught with many secrets and that she herself may become a victim. The film is somewhat scary, but depressing, what distinguishes many European horror films.

Reanimator, the dentist or pathologist?

Hollywood is also consistently scares the audience with films about doctors, maniacs.

"The dentist" (1996) directed Brian Yuzna. When successful, the dentist stops taking anti-anxiety medications, his victim is a beautiful wife, which he is constantly jealous. The film is especially recommended to all those who are afraid of dentists.

"Reanimator" (1985). In the experiment conducted in the morgue, will break living dead, which is very aggressive. The film is low budget, but is considered a classic and a must for all fans of this genre.

"Pathology" (2008). Killer doctors compete with each other, who better to kill a man. The film is sometimes quite scary, especially for those who are afraid of morgues and pathologists considering them to be cynics and perverts.

"Dr. giggles" (1992). In childhood the main character had seen how his father is doing inhumane operation. And he, staying true to the family tradition, coming from a psychiatric clinic, returns to his hometown and continues to experiment on people.

"Dead ringers" (1988). Director - David Cronenberg. Two brothers work together doctors. One shy, the other a master in seducing women. Movie star Claire, without knowing, begins to meet immediately with both brothers. As events will develop further? The film is very good, look it is definitely.
Is the advice useful?
Подписывайтесь на наш канал