Rolls of pita is good not only in the form of cold snacks, but also can be a good alternative to sandwiches. They can take on the road as a light snack and for the festive table they will be a good decoration. 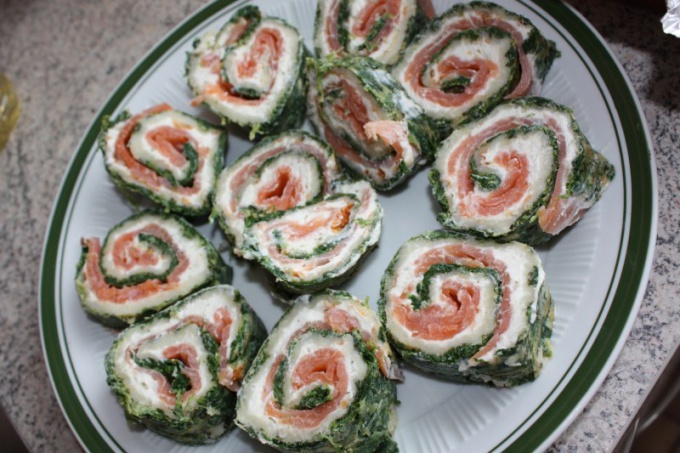 Related articles:
If you speculated that this would be to prepare the newcomer for the holiday, try to make a wonderful appetizer – roll of pita bread with different fillings. For example, cottage cheese can create a lot of different options of flavors. It turns out much better than mayonnaise, which is pita bread gets wet.

Fish fillets cut so as to obtain long, thin layers. Spread pita bread on a flat surface. It is necessary to lay a thin layer of spinach with curd cheese, sprinkle the fish pieces, the next layer, again spread with cream cheese with spinach.

Pita bread rolled into a roll. You can cut it into slices and fasten with toothpicks or keep in the refrigerator and cut when it slightly hardens.

Spinach thawed, squeeze and put in a skillet with a drop of vegetable oil, cool. Sheet pita to deploy, and well greased with sour cream – it will make the pita more elastic. Lay the spinach on the pita bread and spread a thin layer, a little stepping back from the edge.

The next layer to make curd cheese. With a fork slightly to deepen it to the spinach. To minimize the pita bread into a roll and squeeze at the top, to make it more flat. To put it in a baking dish, spread top with sour cream. Bake at 180 degrees for about 20 minutes, then at 200 degrees for another 5 minutes. Then turn off the heat and let stand for rolls in the oven for another five minutes.

You can now cut the finished roll into portions pieces and serve. Out of the package with two sheets of lavash is approximately twelve pieces.
Is the advice useful?
Присоединяйтесь к нам
New advices