Where went the legend of the blossoming fern

In ancient times, was built the legend about the amazing fern flower. The mysterious flower was attributed magical properties due to which he could in life to bring happiness to its owner. But to find and pick a flower was incredibly difficult. 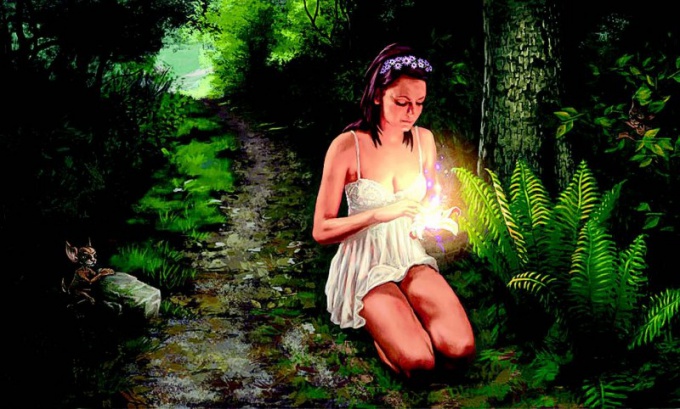 The legend of the fern flower

Legend has it that ferns bloom once a year – in a magic night on the eve of Ivan Kupala. Allegedly that night between the leaves of a fern ember lights up a little flower Bud. However, she is not standing still, but moving, jumping from one place to another, and even chirps. When the clock strikes midnight, the kidney revealed a fiery flower, its light illumines everything around it. It is sometimes said that at this point, hear the thunder and the ground shakes. And the flower blooms only for one brief moment, and you have to rip it at this moment.

Brave, decided to go in search of fern flower should close to midnight to come into the woods to find a place where the fern grows, draw a circle around a waiting flower. But, soon as it shows flower, devil all his might will try to scare the brave. However, you need to take a knife and cut his hand, and then put the flower into the resulting wound and run home without looking back.

But the brave man managed to get the flower reward. He will learn to understand the language of plants and animals. From talking plants know what grass the illness helps and can become a great healer. Will be able to charm any girl, before it opens all the locks and break any circuit. By the way, why fern is sometimes called the gap-grass. But most importantly – the owner of a wonderful flower opens all the treasures hidden in the bowels of the earth.

For this reason, the fern flower is so keen to have evil spirit. But he was not given into the hands of evil, and she has to use for its own purposes of the person. A scary story told about it in his novel "the eve of Ivan Kupala" Nikolai Vasilievich Gogol. Its main character – a poor serf Petro – unknowingly fell into the clutches of the evil forces and was ruined by it.

If the fern blooms on, really?

Science has long and well established that the fern reproduces by spores and never blooms. However, there is a theory that the roots of ferns are sometimes, though rarely, grow a mushroom. When ripe, its shell is broken and the fungus becomes a bit fosforescente. Perhaps someone from the ancient Slavs saw this mushroom and took him for the mysterious fire flower?

But wherever there was a legend, she has found the response in souls of people, inspiring them to new, wonderful, and sometimes terrible history.
Is the advice useful?
Присоединяйтесь к нам
New advices