How to wear wedding ring

Since ancient times, the bride and groom exchanged rings as a token of his devotion and loyalty to each other. This tradition has existed for several millennia, it is prevalent in almost all countries of the world. Many people are interested in which finger to wear engagement ring and what should be this decoration symbolizes the inseparable Union of a loving couple. 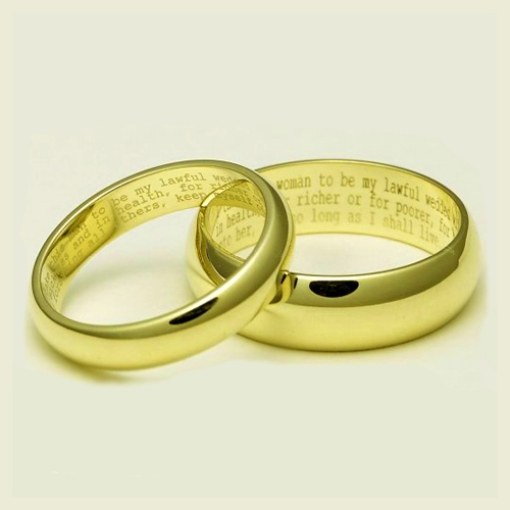 Where did the custom of exchanging wedding rings

The birthplace of the rings, including engagement, is considered to be Ancient Egypt. First, they served as a seal, with which the Pharaoh had given his authority.

Later the wearing of the rings ceased to be the prerogative of the nobility. Gold rings started wore rich and the poor could choose jewelry made of silver, bronze, copper, glass, ceramics and other materials.

What should be the engagement ring

In ancient times, family was a sacred concept. Wheel, circle is one of the most ancient symbols. Round decoration, with no beginning and no end, signified eternity of the family unit. In addition, if the two rings together, they form the infinity sign.

The precious materials from which were made these ornaments meant how now care about each other two people who got married. The most valuable metal at all times is considered the gold. In ancient times many peoples it was considered a symbol of the sun - source of light, warmth, joy of life.

However, several centuries ago, in many Catholic countries, was taken to the groom's ring was made of gold, but for the bride - silver. This metal in ancient times was considered a symbol of the moon a female planet.

Many people are also interested in what should be the engagement ring: carved, plain or with stones. This question can be answered only by the spouses themselves, since such a decision depends only on their preferences. Lately most prevalent ring with an engraving that reflects all the feelings of the two people who enter into marital Union.

In Russia the bride and groom put on wedding ring on the ring finger of the right hand. It should say that on this hand, these ornaments are in Austria, Venezuela, Norway, Israel, Poland, Georgia, Germany, Greece and India. The right hand has long been considered the wise, "right", and therefore its solution is more correct.

But the people of Japan, Turkey, France, Sweden, Cuba, Canada, America and Mexico wear rings on left hand. These traditions have deep roots in history. For example, the ancient Egyptians believed that the ring finger of the left hand connected to the heart of the particular blood vessel or nerve. Therefore, it was thought that the decoration was connected directly with the heart and symbolized deep feelings. They say that the first one wearing the wedding ring on the fourth finger of the left hand itself Cleopatra.

However, this ornament can be worn not only on the ring finger and not even just on the hand. For example, Jewish women love to wear this accessory on the index finger, as Gypsies traditionally wear a ring, suspended on a thin chain around the neck.

Also often there is a question about which hand to wear engagement ring divorced and widowers. The answer is simple: widowers can wear it on the opposite arm than in the marriage Union. As for divorced people, as a rule, they do it is removed.
Is the advice useful?
See also
Присоединяйтесь к нам
New advices