How to give flowers etiquette

Flowers are one of the most popular gifts in the world. They are given for no reason, thrown to the feet of Actresses, hand, happy brides, in mournful silence folded at the foot of the monuments. They can Express gratitude, regret, admiration and respect. There is nothing more universal and meaningful, like a bouquet. Of course, those times when each flower had its meaning, much has changed, but some rules of flower etiquette still apply today. 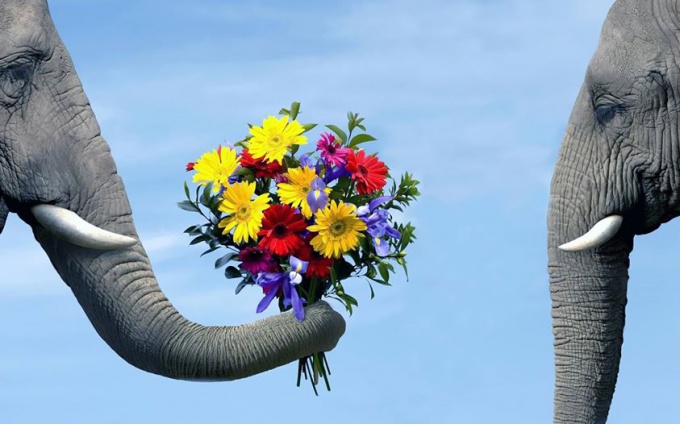 How to choose the right flowers

Once the language of flowers it was possible to conduct whole conversations – to quarrel, to confess in love, to forgive, and even to threaten. In the modern world from this "the alphabet of passion" was only the most General outlines. So, for scarlet, lush roses firmly entrenched the title of the symbol of passion, and fragrant white lilies of innocence. The brighter the colour of the flowers than they are more elaborate, the more substantial must be the reason for their presentation. Exceptions are wedding and birth of a child for the holidays, it is customary to bring flowers delicate shades, with a delicate aroma and low on the stem.

Men give flowers high, with large buds, such as roses, Calla lilies, lilies, orchids, gladioli and irises. Primroses and wild flowers – the intimate gift for her, as well as very low bouquets of pansies, daisies, violets, asters. Flowers in pots are also reserved for friends and close relatives. If you want the bouquet to be as far as possible pleasing that person you are giving it and it required minimal care – giving basket in which the flowers are placed in a special moss.

When choosing flowers for your date, keep in mind what you are about to go with his beloved. If you are going to spend time at home, a large bouquet would be appropriate, but walking around the city, sit in the theater, to dine in the restaurant with a gift like that is extremely uncomfortable. In such cases, more appropriate small, compact rosettes.

How many colors should be in the bouquet

Known to many a rule that the bouquet must be an even number of flowers – surprise rule is not. Wish to give three, five, seven and so on of the flowers in the bouquet is more to do with superstition, common in the European countries, superstition also dictates avoiding the number thirteen, though it is odd.

The etiquette to stick to an odd number of flowers is only if they are less than twelve, dozen. The opposite is true, for the funeral you can send a bouquet or an even number of colors, or any colors if more than a dozen. Etiquette also dictates to give one flower only the closest and most intimate acquaintances, no matter how exotic and luxury this gift.

To give flowers to the man

Somehow there is a perception that to give men, if they are not actors, flowers not accepted. This is not so. Etiquette is simply more rigidly reglamentary occasions on which it is possible to bestow a bouquet representative of the stronger sex. On the anniversary, in honor of any tangible personal achievement, such as receipt of awards, publication, film or theatrical performance, a public speech, it is appropriate to present a bouquet and the man.

It has to be flowers of rich, noble tone, on high legs. In recent years it has become fashionable to give men the sunflowers or yellow chrysanthemums. These flowers meet all the requirements of etiquette, and besides, they have a color that is now associated not with betrayal and rupture, and with prosperity, luck and wealth.

How to give flowers

The fact that the flowers are presented without packaging, is considered to be well known. That's the only rule of etiquette was introduced long before been invented a variety of bright and convenient packaging materials, decorated with ribbons, bows, bright prints. If the bouquet is Packed by the florist, you should leave all the "decorations", if you just put it in a convenient package, albeit with a bright border, or mirror effect, the polyethylene should be removed.

If you are giving flowers or a creative public figure – bouquets presented after the speeches, meetings. To throw flowers on stage – bad form. Innovation has become firmly rooted in modern etiquette, "floral" requests to be observed. So, the bride and groom inviting to the wedding, you can make a PostScript about the "color" of the wedding. Made not only to find the toilets by following the specified range, but also to bring bouquets, decorated in the same colors.

Inappropriate flowers are in hospitals and, oddly enough, at the funeral. Mothers flowers it is better to send home and some relatives of the deceased sometimes asking instead of flowers to donate money to certain charities.