Kangaroo is one of the most emblematic mammals of the world. These animals live exclusively in one place in Australia, so until the 18th century about these creatures people did not know. 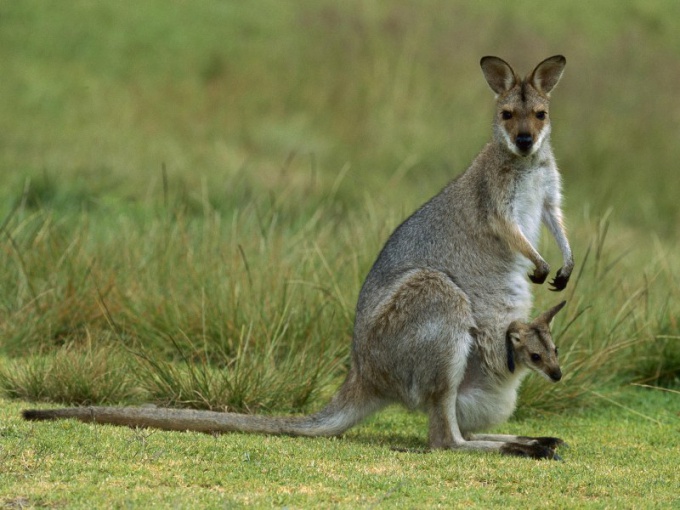 Related articles:
Legend has it that in 1770, when James cook first landed on the shores of Australia, he saw a large animal that moves by jumping and asked the aborigines what it is. The indigenous people answered him in his language that sounds vaguely was similar to the word "kangaroo". So entrenched is the name for the marsupial animals. Today zoologists are 50 known species of kangaroo, they differ in size, coloring, habitat, but their common feature is the presence of bags.

The biggest kangaroos weigh about 80 kg, they have powerful hind legs, narrow shoulders and small front legs, like a human. Due to the fact that kangaroos can carry the weight of his body in tail, he in one motion can cause terrible clutches of the enemy and to move and jumps up to 3 meters in height and 12 in length. The speed at which they can achieve, varies from 30 to 50 miles per hour.

The most famous type of kangaroo are the giant. They live in Australia.

Is there a bag a male kangaroo?

Initially, the bag was in all members of the kangaroo. But over time, it atrophied in males as unnecessary, and the current representatives are only a special femur bone, which she had kept. And the females all left in the old bag, attached at the bottom of the body, is the true refuge of small kangaroos.

With these animals involves a huge number of myths. Previously it was thought that kangaroos reproduce exclusively vegetatively, that is, from the mother's nipple. And in the 19th century, zoologists believed that at birth the mother takes the baby in her mouth, and then puts it in a bag to one of the nipples. Recently, scientists have found that a month after conception, the little kangaroo, weighing about 750 g alone gets to handbags mother, and she does not help him in this.

Interestingly, the mother kangaroo can produce a baby from the bag when I want to. This is due to the strong muscles on the abdomen in the female.

There the baby starts to feed on mother's milk through one of the nipple 4, and its composition depends on the sex and age of the baby. If you are born a few kangaroos, they also get a different composition of milk. Why this happens still remains a mystery.
Sheltered from temperature extremes and predators, the cub begins to grow very rapidly, and by the end of 6 months he can get out of the bag, and after 8 months moved independently.
Is the advice useful?
Присоединяйтесь к нам
New advices