How to cook frozen pizza purchase

Frozen foods can probably be found in many refrigerators. For modern people, most of the time conducting on the job, they have become a real salvation and allow you to quickly obtain a delicious and nutritious dinner without spending time cooking. Frozen pizza is among the most popular dishes from this category of products. 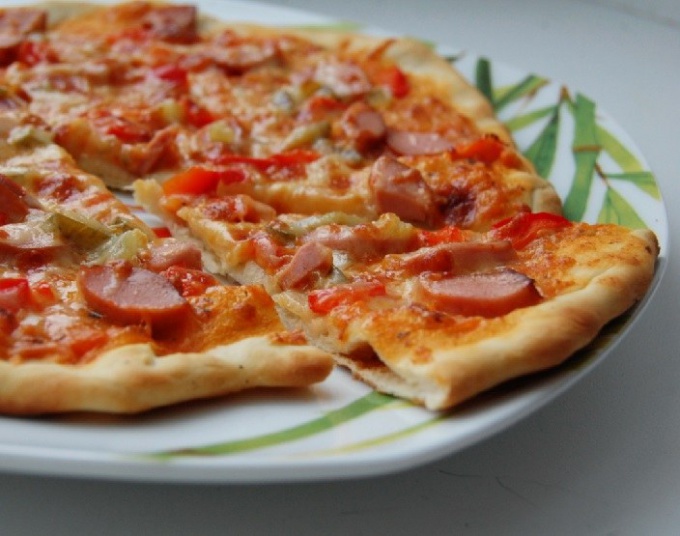 Frozen pizzas cook in exactly the same way as usual, using the same secrets and technology used by the Italians. On a pre-baked cake-the Foundation laid out the stuffing, the main ingredients are tomatoes and cheese that the pizza is sprinkled on top.

You can freeze prepared with his own hands the pizza to eat it later. To do this, refrigerate the cooked pizza, tightly wrap it in clingfilm and put in the freezer.

Manual for the preparation of the purchase of pizza printed on the cardboard box that packaged this product. Usually pizza only have to reheat in the microwave or in the oven. Cooking time may vary depending on the size of the pizza. Product standard weight 530 g should be kept in the defrost mode for about 8 minutes and then switch the microwave on a power of 500 watts and cook 4-5 minutes, then to increase power to 750 W, and simmer for 1 more minute. Polyethylene, which is Packed in a pizza, do not have to shoot, otherwise it will become dry.

If you cook frozen pizza without the plastic package in the microwave, top it can be covered with special plastic cover that protects the top layer from drying out.

There is another method for microwave oven and pizza weight 200 g. Defrost it in defrost mode or if it is not, in the "below average Power", time 2.5 minutes. Remove the pizza and let it stand at room temperature for 3-4 minutes, then put in the microwave on full power (600-700 watt), and bake for another 1 minute.

If you will be cooking in the oven, pre-heat it to 200, put the pizza on a baking sheet or in a special ceramic form for roasting and send it in the oven for 6-8 minutes. The most accurate indicator of its readiness will be the aroma.

The history of the emergence of frozen pizza

The first frozen pizzas introduced in the US. Ron Simaku, the owner of the bar "Grave source" came up with the idea to sell ready-made pizza frozen, the buyer was able at any moment to heat and eat it hot.
Frozen pizza, which was named Tombstone Pizza, quickly became a popular product.

A large company producing fast food, Kraft Foods, acquired it all right from Simeka and began producing frozen pizza on an industrial scale under its brand. The costs of acquiring these rights has paid off very quickly, already in 1986, she earned her first million by selling frozen pizza.
Is the advice useful?
Присоединяйтесь к нам
New advices