Who were the Triple Alliance and the Entente

The first world war, which until 1939 was the largest military conflict in history was the confrontation between the two alliances: the Triple Alliance and the Entente. The composition of these blocks were fickle, they changed during the war and at the time of its completion has involved the most civilized countries of the world. It is for this reason war and became known as the First world war. 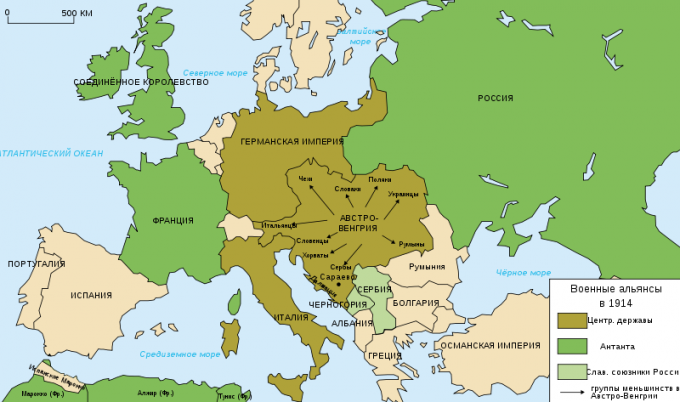 The basis of the Triple Alliance was formed in two stages, in the period from 1879 to 1882. The first members were Germany and Austria-Hungary, which signed a contract in 1879, and in 1882, it also included Italy. Italy has not fully shared policies of the Union, in particular, had a non-aggression Pact with great Britain, in case of conflict, the last with Germany. Thus, the Triple Alliance included most of Central and Eastern Europe from the Baltic to the Mediterranean seas, some countries of the Balkan Peninsula and the Western Ukraine, which was then part of the Austro-Hungarian Empire.

Almost two years after the war began, in 1915 Italy, which suffered huge financial losses, withdrew from the Triple Alliance and joined the Entente side. At the same time on the side of Germany and Austro-Hungary arose the Ottoman Empire and Bulgaria. After joining the unit was renamed the Quadruple Alliance (or Central powers).

Military-political bloc of the Entente (from French "agreement") also was formed immediately and was a response to the rapidly growing influence and the aggressive policy of the countries of the Triple Alliance. The creation of the Entente can be divided into three stages.

In 1891 the Russian Empire signed a Union agreement with France, which in 1892 was added a defensive Convention. In 1904, the UK, seeing a threat to their policy of the Triple Alliance, made an Alliance with France and in 1907 with the Russian Empire. Thus was formed the backbone of the Entente, which became the Russian Empire, the French Republic and the British Empire.

These three countries, as well as joined in 1915 by Italy and the Republic of San Marino, took the most active part in the war on the Entente side, but in fact this unit at different stages joined 26 States.

From the countries of the Balkan region in the war of the Triple Alliance entered Serbia, Montenegro, Greece and Romania. Other European countries joined the list are Belgium and Portugal.

Latin American countries are almost at full strength was on the side of the Entente. It was supported by Ecuador, Uruguay, Peru, Bolivia, Honduras, Dominican Republic, Costa Rica, Haiti, Nicaragua, Guatemala, Brazil, Cuba and Panama. Northern neighbor, the USA, the participants of the Entente was not included, however, took part in the war on her side as an ally.

The war also affected some countries in Asia and Africa. In these regions, on the side of the Entente made by China and Japan, Siam, the Hejaz, and Liberia.
Is the advice useful?
Подписывайтесь на наш канал