What is a food chain in nature

The food chain is the many overlapping branches, forming trophic levels. In nature there are pastoral and detrite the food chain. The first is on another call "grazing chains" and the second "chain decomposition". 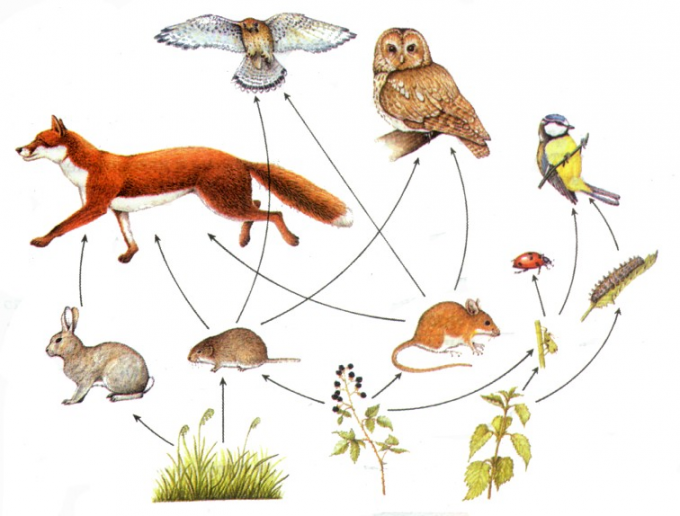 One of the key concepts needed to understand the life of nature, is the concept of "food (trophic) chain". It can be viewed in a simplified, summarized form: plants ‒ herbivores ‒ predators, but in nature the food chain is much more extensive and complex.

The food chain is a transfer of energy and matter, 90% of which is lost in the transition from one level to another. For this reason, chains are usually present 3 to 5 units.

The food chain is included in the total circulation of substances in nature. As a real connection in the ecosystem is large, for example, many animals, including people, eat plants, herbivores, and predators, the food chain always intersect each other, forming food webs.

The types of food chains

Conventionally, the food chain is divided into pasture and detrite. Those and other equally operate simultaneously in nature.

Grazing food chain is the relationship of different feeding method groups of organisms, some sections of which are United by relations of the type "eat ‒ eating".

Derinya food chain represent the interaction of the dead herbivores, carnivores, and dead organic matter from plant detritus. Detritus is the common name for various groups of microorganisms and products of their activities involved in the decomposition of the remains of plants and animals. This bacteria and fungi (decomposers).

In nature the food chain is not stationary, they are much branched and intersect, forming the so-called trophic levels. For example, in the "grass ‒ herbivore", trophic level includes many types of plants consumed by these animals, and at the level of "herbivores" there are numerous species of herbivores.

The trophic levels form a food pyramid (ecological pyramid), which is schematically indicated levels that result in the transfer of energy from the decomposers (detritus) to the producers (plants, algae). From them to the primary consumers (herbivores). From them to the secondary (carnivores) and tertiary consumers (predators that feed on predators and parasites).
Is the advice useful?
Присоединяйтесь к нам
New advices