Pickles for the winter - the easiest way

What recipes do not only harvest the cucumbers for the winter. Pickle, ferment together with tomatoes or zucchini, using dry spices and herbs. Some people prefer salting in barrels, some in glass cylinders. But there are a few simple ways of pickling cucumbers, which handle even inexperienced hostess. 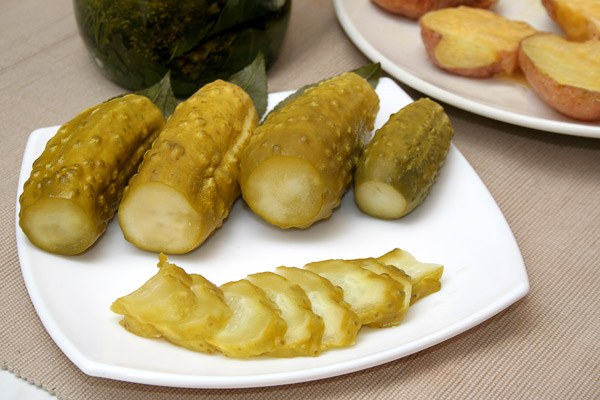 This recipe is a simple way of preserving vegetables in a glass three-liter jar. The hermetic sealing of containers capable of providing high-quality pickles and long-term storage of the product during the winter at a temperature not exceeding 20oC.

For pickling cucumbers should be washed, tightly put in a glass cylinders, shifting their spices. Possible, cucumbers should choose the same size and thickness, so that the process of salting is uniform.

For preservation 10 kg of cucumbers is necessary to prepare the following amount of spices:

To enhance the taste and flavor of pickles, you can add the following spices:

To give the cucumbers a special fortress, you can add banks in oak and cherry leaves. The total weight of spices should not exceed 5% of the weight of cucumbers.


It should be remembered that an excessive amount of herbs can give pickled cucumbers bitter and unpleasant taste.

The greater part of the spices should be placed in a jar on top of cucumbers to keep them float. Then the pickles, pour the brine. For its preparation you will need:


It is impossible for pickling vegetables to use iodized salt.

Cucumbers drenched in brine should stay in this form from five to six days at a temperature of 18-20oC to complete the fermentation process. During this period, should be regularly removed from the surface of the brine resulting film or foam from a mold (when they appear). Need to refill banks a brine of the same strength.


After digestion of the glass cylinders need to drain the brine in a saucepan and boil. Introduced while boiling foam has to be removed from the surface of the liquid, and then pour the brine back to the jars with cucumbers.

To the pickles after fermentation has retained the crunch and elasticity, it is possible before boiling to add to the brine a little dry mustard.

After 3-5 minutes the brine is required again to merge in a saucepan and heat to boiling stage. After that, the cucumbers need to re-cover with brine and close tightly with sterilised lids.

You can get gherkins instead of pickle at the end of the fermentation process (3-5 days after salting) fill jars with hot cucumbers (is 95oC) salt tomato juice, you need:

In this case, the required additional sterilization of the jars of pickles: three-liter – 50 minutes, liter – about half an hour. After sterilization, the container of pickles should be boiled twist caps, flip and heat wrap.
Is the advice useful?
Присоединяйтесь к нам
New advices