What kind of film you can watch about love teenagers

Palette of recent films about teenage love variety. Here and classic stories about falling in love young people from different backgrounds, and movies about the first unconscious feeling, which is awakened to the person of the same sex, and the feeling of first love, which breaks on the first betrayal. I am glad that films about happy love too. 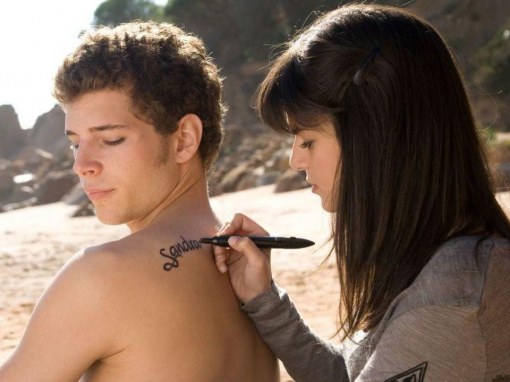 Related articles:
Of the story about teen love rarely talk about happy love. Although there are some fabulous movies about the fairy of love: a modern interpretation of the old fairy tales. But most of this movies sad, because they are about growing up, which a priori can not be painful: growing up and body and soul, when pure, universal love is confronted with everyday life, with the world hostile.

What kind of movies you can watch from the left in recent years? For example: "Twilight," "Sex, party and lies", "three Sketches", "a beautiful mind", "the Game of the hanged man," "Summer rain," "Inadequate people", "Three meters above the sky", "Cold shower", "walk to remember", "the Life of Adele".

"Summer rain" (El camino de los ingleses, 2006) - the directorial debut of Antonio Banderas, perhaps nostalgic about his own youth: the story of four friends and their girl friends. Each has their own history, but they are trying to start a real adult life with sex, money, betrayal and death. It's almost poetic, but very sad story.

"Sex, party and lies" (Mentiras y gordas, 2009) - a film about the dependencies that are so attractive in my youth, when I want to try everything at once, when there is no common sense can't keep from stupid trouble. In search of happiness movie characters do in what does not deny. But it is impossible to find happiness if the one you love, loves you.

"Your heart may be an abandoned house or street, which sometimes is happiness..."

"Three etudes" - a story about students in art College. There are three of them and they are talented, romantic and passionate. And two friends are in love with one girl and she meets them both back. The three of us happiness really possible? After almost a year they will be together. But all things must end and learning, and feeling, which can be divided into three. Before the heroine of the film appears dilemma which of the two will it stay? The movie is open-ended.

"The game of the hanged man" (El juego del ahorcado, 2008) - the girl and the boy met in early childhood, together, fooling around, learning, growth. He was her friend, and she for him from the very beginning was the only one. But one day her grown-up girl was a trouble and the young man failed to save her, but got revenge. Now they were tied up and another mystery crime and the sense of foreboding.

"Three meters above the sky" (Tres metros sobre el cielo, 2010) - bold beautiful young man with an explosive temper, biker from bad company and everyone's favorite, touching meets a girl from a good family, studying at the Catholic College. From the first moment, at first glance run between them not sparks and fireworks. But what attracted them to each other, and it also lit by the blast of the characters destroyed the fragile relationship. But maybe not forever?

"Adele's life" (La Vie d'adèle, 2013) - the ordinary girl from an ordinary family, an ordinary school, with ordinary dreams of love and a little bit in love with a good boy meets girl with blue hair. And the generality and commonness to pieces because of the feelings between them.

"A beautiful mind" (Beastly, 2011) - history-tale, transferred to modern life. A very beautiful boy, whose beauty is the measure of all things, for his bad character cast a spell, turning into a monster. Spell it may be the only one that really loves him. And this, of course, exist. And they will save each other.

"Twilight" - a beautiful girl moves into a small town where her dad lived. On the first day of school she meets a handsome strange young man, the sight of which fascinates and captivates her... smell. And no matter what he will be a vampire and his whole family are vampires and in love with her still and the other boy is a werewolf, whose entire family is like that. The main thing – it is tough love.

"-I have a feeling that if I leave now — you're going to jump out the window".
"-Would I brush my teeth, if your going to kill yourself?"

"Inadequate people" (2011) – schoolgirl with a difficult character and a sharp tongue twitched with living the life of a mother and without a father, met an adult man who suddenly became a neighbor on the landing. A seemingly banal story: she can not not fall in love with a beautiful young neighbor. But the neighbor, quite adequate people, only suffering from a slight mental disorder – sudden aggression, falls in love with a youngster. Surprisingly clean, Comedy film with a single kiss in the final.

A walk to remember (A Walk to Remember, 2002) – a film about happiness, which gives love, albeit with a sad ending, as the heroine dies. But before she dies, she will be happy, because the school meet a careless young man, handsome school – his only love. The path to each other they will have difficult: after initial rejection, the machinations of high school girls rival parent the custody of a strict father, but they will win everything, get married and be happy.

Teenagers always want to be as soon as possible to become adults. Their experiences are hypertrophied and dramatic, because everything is comprehended for the first time. And first love is always romantic, but first love is not always the case.
Is the advice useful?
See also
Подписывайтесь на наш канал