Where are the Maldives

The majority of Russians, the Maldives are not associated with a specific geographic point, as an abstract embodiment of a perfect vacation is white sand, warm sea and a minimum of extraneous. But, like any other object on the map, this place has its own coordinates. 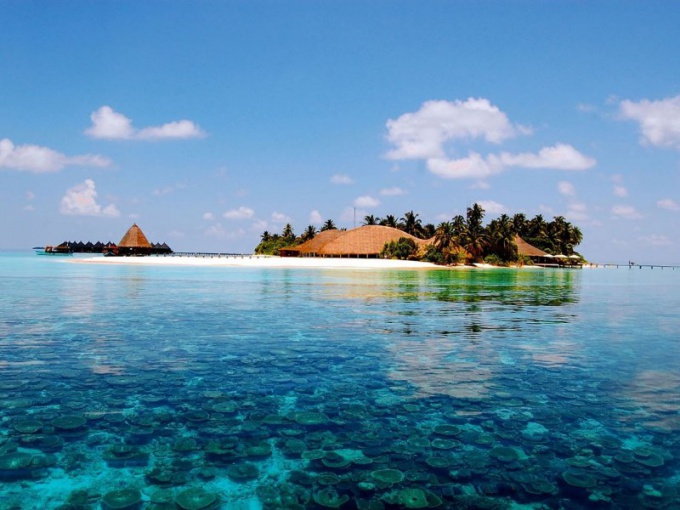 To find the Maldives on the world map, you first need to find it in India. It's easy – the Peninsula, which is a state located in South Asia and has the shape of a triangle. From the southernmost point of this exotic country, you need to mentally draw a line to the South-West. There is a large group of atolls – coral Islands called the Maldives.

Atolls represent a closed or open ring, formed by the crater of an extinct volcano, in the middle of this "island" a lagoon filled with sea water.

The distance to India is about 700 km, it is worth noting that the atolls are very square, so the South removed at 1 000 km is Washed by the waters of the Maldives in the Indian ocean and its proximity to the equator have a unique climate with almost constant temperatures throughout the year and only two distinct seasons – dry and rainy.

Because of its volcanic origin, the Islands have a small height above sea level (about two meters) and a rather meager fauna – it is home to only a few mammalian species. But the underwater world is very diverse.

The Government Of Maldives

All atolls located in the Indian ocean, United in the state the Republic of Maldives. It should be noted that its history began in 1965, when Britain, under the protectorate of which were Islands, generously provided them with independence, however, is not just so, and after fierce revolts of the population against the government of the Empire.

From the British, however, left a lot, including a name, it is a distorted word in Hindi: "Mahal" - the Palace and diva island. The capital of the state the Republic of Maldives is malé, who, incidentally, is the only town that has this status.

Maldivians are Muslims, but rather Sunnis. In the 12th century on the Islands of the landed Muslim preacher, who founded a dynasty, ruling until the arrival of the Portuguese, the Dutch and later the British.

How to get to the Maldives

Journey to the Maldives Islands will require a tourist not only costs time and money, but also patience, because direct flights from Moscow to the capital of the state of the male lasts for more than 8 hours. If non-stop flight for any reason unavailable, will have to plan a route with a connection at an intermediate airport, usually Colombo, Sri Lanka, Abu Dhabi in UAE or Dubai in Saudi Arabia. In any case, it is necessary to consider that from the male to the right of the island will be reached by boat or seaplane.
Is the advice useful?
Подписывайтесь на наш канал