Nucleic acids are polymers (polynucleotides), which play a huge role in the storage and transmission of hereditary information in living organisms. Distinguish between deoxyribonucleic (DNA) and ribonucleic (RNA) acids. 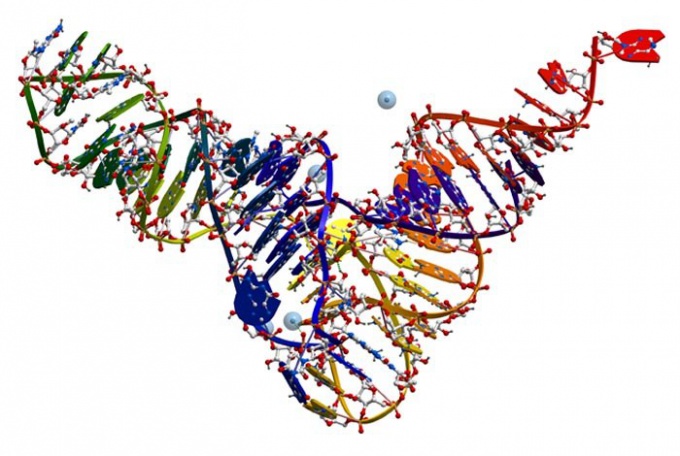 What are the types of RNA

In the living cell there are three types of RNA: ribosomal, transport and information (matrix) RNA. They all differ in structure, molecular size, localization in the cell and the functions they perform.

What characterized the ribosomal RNA (rRNA)

Ribosomal RNA accounts for 85% of all RNA cells. They are synthesized in the nucleolus. Ribosomal RNA are the structural component of the ribosomes and participate in protein biosynthesis.

Ribosomes – the organelles of the cell, composed of four rRNA and several dozen proteins. Their main function is protein synthesis.

Why do we need RNA transport

Transfer RNA (tRNA) is the smallest in size of RNA of the cell. They make up 10% of all cellular RNA. Transport of RNA formed in the nucleus on DNA and then move into the cytoplasm. Each tRNA carries specific amino acids to ribosomes where they are joined by peptide bonds in a specific sequence messenger RNA.

Each amino acid corresponds to a sequence of three nucleotides, called a triplet. Nucleotide is the monomer of nucleic acids consisting of a phosphate group, a pentose and a nitrogenous base.

The anticodon is different for tRNA carrying a different amino acid. In the triplet-coded information about the amino acid that is transferred to this molecule.

Where is mRNA synthesized and what is their role

Information, or messenger RNA (mRNA, mRNA) are synthesized at the site of one of the two strands of DNA by the enzyme RNA polymerase. They represent 5% of RNA of the cell. The sequence of bases of mRNA is strictly complementary sequence of bases of DNA: adenine DNA corresponds to uracil, mRNA, thymine – adenine, guanine – cytosine and cytosine – guanine.

Messenger RNA reads the genetic information from the chromosomal DNA and carries it to the ribosomes, where this information is implemented. Nucleotide sequence of the mRNA encrypted information about the structure of the protein.

RNA molecules can reside in the nucleus, cytoplasm, ribosomes, mitochondria and plastids. Of the different types of RNA formed a single functional system, is directed by protein synthesis for the realization of hereditary information.
Is the advice useful?
Подписывайтесь на наш канал