What happened in Russia before the advent of tea

Tea is the favorite drink of many people, as it tones and good thirst quencher. Tea in Russia began to use in the 17th century, when this drink was brought as a gift to the king. This begs the question: what are used the Russian people in ancient times before the advent of tea? 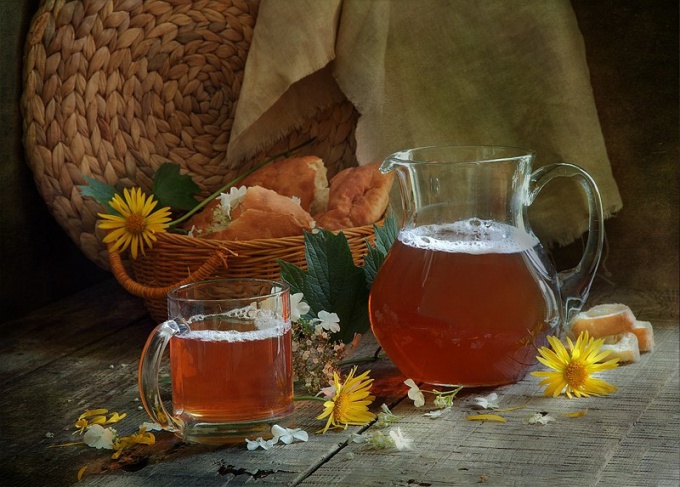 In Russia there were many drinks consumed to the well-known tea. Grandparents loved the infusions and decoctions of herbs, drinking berry fruit drinks, brewed kvass, fruit drinks and drinking from the bark of trees. For beautiful colors in these decoctions were added dried fruit carrot and beet, which are pre-fried. Dairy products consumed curdled milk, whey.

Sbiten is a hot drink that was obtained after infusion of honey on the water. Dissolved in water honey with spices cooked in half an hour. Drinking this beverage warm and cold.

In Russia tea was first brought in 1638 Russian nobleman and Ambassador Vasily Starkov as a gift from the Mongol ruler. It was not today's usual drink, and the famous Altyn-Khan: tea with milk and fat.

Vsuarez was a thick (like jelly) broth - hence the name. Often to use raspberries and cranberries. The cooking process was a long one, the pot would simmer in the oven until the day, after which it was filtered and left overnight to settle.

Mead, and sbiten was prepared on the basis of honey. By the way, sugar Rus learned not so long ago - a couple of centuries ago, and because of all the drinks until the 18th century, added honey. Honey drink cooked in the Russian stove with the addition of hops after it was taken out and left in a warm place for three days, at this time began the fermentation process.

Mead was considered finished only when air bubbles have ceased to walk on liquid. The drink was poured into bottles and kept in the cellar. It should be noted that Mead a soft drink, it was served on holidays, drove the peasants in the field during mowing.

For the first time in Russia kvas began to produce and consume as a drink in the year 996. It was prepared on the basis of oats, rye flour and rye sourdough. Any of these components filled with warm boiled water with honey. Drink insisted for several days.

Thanks to the Domostroy today there are more than 500 species of kvass, which was prepared in Russia. Contrary to popular belief, this drink is drank, not only peasants, but nobles and even kings.

And finally, rash or sated in Russia in ancient times was replaced by tea in its properties and characteristics. The drink is prepared just honey diluted with boiling water and drunk hot or cold. For the aroma are often added herbs.

It is also known that in Russia drank Ivan-tea or Koporye tea, which is prepared from the leaves of fireweed. This drink tasted like a modern tea. Interestingly, this drink today has a lot of popularity due to its healing properties.
Is the advice useful?
Подписывайтесь на наш канал