How to forgive betrayal

Betrayal is a human offense, which only at the mere mention of many people causes anger and fear. The person who was confronted with meanness, leaves the trust, without which it is difficult to live. It is therefore necessary to be able to forgive. Yes, it's complicated. But, you forgive the betrayal, you gain the freedom and peace in your soul. 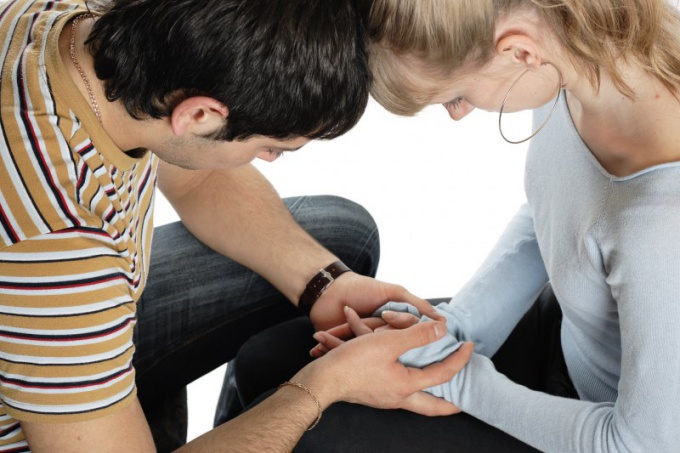 Betrayal: how to live?

From birth a person is looking for a reliable back and a shoulder to always lean on. In the first 2 years of life is the mother, then after meeting with the society of friends, growing up is the second half. Someone is good, someone bad. But sooner or later almost every man standing in front of a mirror, notices there is nothing but emptiness and disappointment of betrayal. And the worst thing that a close friend turned traitor.

After you calm down, you will understand how to behave with the person who violated your trust.

The most frequently asked questions after the betrayal and dastardly act on the part of a loved one is:
"How did it happen?";
"What should we do?";
- "How to behave?";
- "How to live after such a shock?"

Unfortunately, to anticipate the betrayal most often impossible. It happens unexpectedly and at a time when he was not expecting. So the question "how did it happen?" difficult to find a logical answer. It's just the way human life, and accept what is necessary.

The question "what to do?" in such a stressful situation pushes "dedicated" person to rash acts. First, he blames only himself, then it covers a wave of anger at the traitor, and then comes depression. Actions in the doldrums confuse, and before the complexity of the situation, and eventually "hurt" at the same time begins to beg and to curse, to beg forgiveness and blame. That is why the best answer to this question is to try to calm down.

As for the question "How to live on after such a shock?", you should let the situation go. Mastering his emotions, having realized the inevitability of what is happening, you need to forgive and let go. Only forgiving, you will find again the faith and the right to continue a happy life.

How to forgive betrayal: advice

After you have calmed down, accept betrayal as a good lesson for the future. It is not necessary to count on a loved one, try in the future to resolve their questions and tell all my secrets. Take a friend-traitor as a weak person, because only weak people do thoughtless, and wrong-doing. Forgive him as a weak personality. Based on the knowledge of psychology, man is much easier to forgive weak than evil.

Depending on the extent of the betrayal, it can be regarded as a bug, in which both sides are to blame. So it's good to analyze the whole situation without unnecessary emotions make the appropriate conclusions.

If the betrayal has the highest severity and is unforgivable, do not revenge! Revenge will not help. Remains forgiveness. But how do you forgive the unforgivable? To do this you need to understand what contributed to this man to treachery and what is to your merit. Try to understand, forgive and release to God.

Remember that all the difficulties in our head. Nothing is impossible, the main thing - time to realize this and act!
Is the advice useful?
See also
Присоединяйтесь к нам
New advices