Why is a condom called "rubber product number two"?

To call a condom a rubber product number two began in the Soviet Union. The fact that the label this product was listed as "Size 2.". What does this marking? 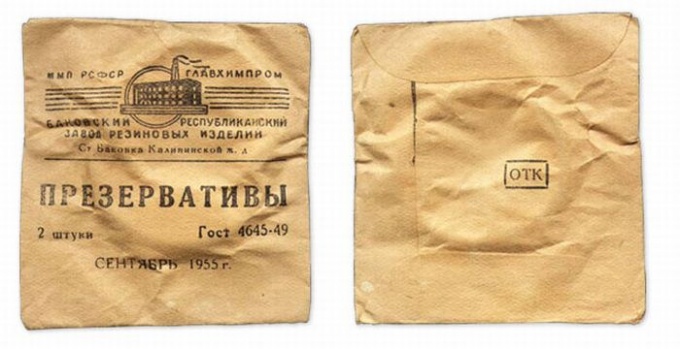 There are several opinions about the origin of the name. One of them says that in the USSR numbered various types of rubber, which differ from each other by density. So, "Rubber product number 1" is called a gas mask, "Rubber product number 2" — a condom # 3— eraser, a "Rubber product № 4" — galoshes. There is a version that in pharmaceuticals the sign "n" indicates the number of pieces of the goods in the package. For example, if the tablets in plate – 10 pieces, then the blister will stand No. 10, and in those days one pack contain 2 condoms. But actually marking No. 2 meant only the size of the product.

Condoms first started to produce in 1936 at the plant Bakovskaya. This was connected with Stalin's decree banning abortions. There were three kinds of products, differing in sizes: No. 1 small, No. 2 – medium and 3 – large. Item No. 1 demand was for obvious reasons: not every man who admits that his below average size, and women in those days, to buy this item was considered shameful. Condom number three were too big so the condom No. 2 became the most marketable commodity, and other types of, most likely, have simply ceased to import, and then release. By the way, the average size fit almost all men, as has been calculated for a length of 180 mm and a width of 54 mm, which is comparable to the European XXL is above average.

The condoms were about 2-3 times thicker than modern, but must withstand a load of up to 200 kg per square centimeter.

The quality of the product and packaging have not changed for decades, as the technology of production. The product was sold only in pharmacies, was made from dense, tough rubber, and to prevent adhesion showered with talcum powder. In color the rubber was yellowish and smelled rather unpleasant. Condoms tasovalis 2 pieces in a carton, which cost 43 cents, and after the reform of 1961 – 4 cents. The people at that time was called the "4 cents". In the mid 60-ies of the remedies began to make individual packages, but in the 70s came the first domestic instances similar to the modern version: with personalities, silicone grease and foil-wrapped. New standard condoms was adopted in 1981 – now marking sizes were lettered – A, B and C. As in the days of perestroika began to produce colored versions : red, blue and green.

In our country in the late 1980s annually sold about 200 million pieces of rubber products.

"Rubber product number 2" in great demand, despite all the inconveniences and disadvantages, especially in times of shortage. Condoms bought for the future, 10 or more pieces. If you had the opportunity to get imported ones, they are even presented as a present for the holidays.
Is the advice useful?
See also
Подписывайтесь на наш канал