How to open and cook a ostrich egg

The average ostrich egg weighs about four pounds and can feed about 15 people. Ostrich eggs are similar in taste to chicken and cook scrambled eggs and omelets, add them to pastries and salads, but before you get to the content, you must break the shell, which is like fine ceramics and reaches a thickness of 30 mm. 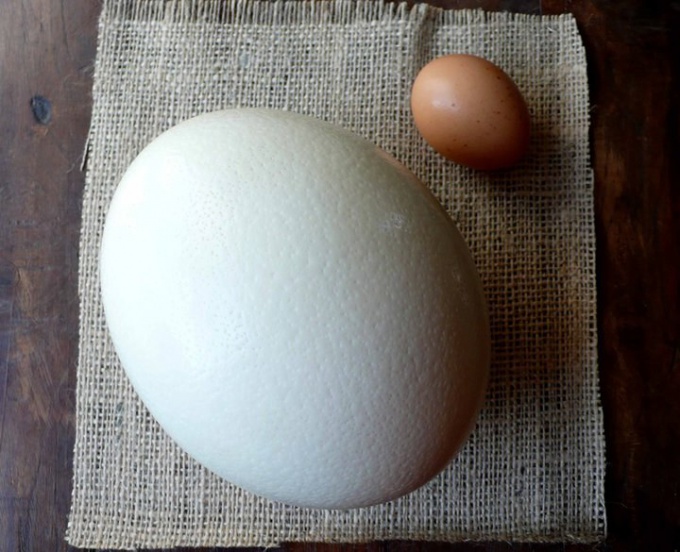 How to open an ostrich egg

Unlike chicken eggs, ostrich is not so easy to break or clean, because its the shell must withstand the weight of an adult ostrich, and he is about 180 pounds. To get to the liquid contents will have to work hard.

One ostrich egg is equal to approximately twenty chicken.

Place the ostrich egg on a flat surface with a thick towel to protect the product from slipping. Armed with a hammer and chisel. Place the last at the top of the eggs and beat it with a hammer until it breaks the shell. Flip the egg over a large bowl and remove the contents.

You can use an ordinary drill to make the egg hole and pour through it the yolk and the white. If they flow too slowly, drill another hole near the first.

Ostrich eggs contain more magnesium and iron, but much less cholesterol and a little less saturated fat than the equivalent amount of chicken eggs. They also contain less of vitamins A , E and zinc.

How to prepare ostrich eggs

If you want to boil an ostrich egg, you should make a hole in it on top, boil some water and drop it in the egg with the hole facing up. Cook the egg for 90 minutes, then remove the shell and use the content in the same way as boiled eggs for salads, stuffing, or cut into slices and put them on the sandwich.

Do the egg in a hole and drain the contents into the bowl of the mixer. Whisk in a homogeneous mass, continuing to whisk, add the cream, herbs, chilli, salt to taste. Distribute the resulting mass on ceramic molds - ramekins and crumble goat cheese on top. Preheat the oven to 180oC. In a deep baking pan pour hot water and set the ramekins. The water should reach the middle of ramekins. Cover the pan with foil and put it in the oven. Prepare zesty cream for 20 minutes, then remove foil and bake another 20 minutes. Serve with fresh salad.
Is the advice useful?
Подписывайтесь на наш канал