Where is the Elbrus

Elbrus – the highest point not only of the Caucasus mountains, but also throughout Europe. Double-headed snow-capped mountain rises approximately in the center of the greater Caucasus mountain range at the borders of the republics of Kabardino-Balkaria and Karachay-Cherkessia in southern Russia. 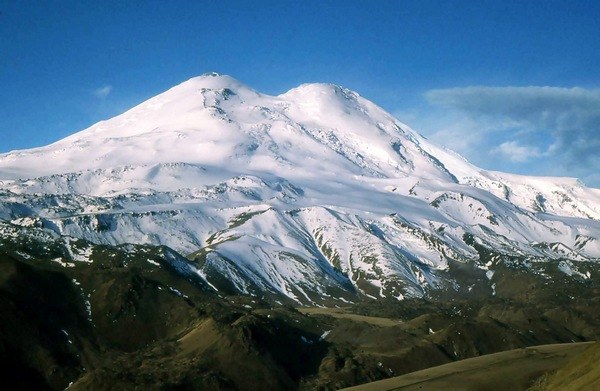 Elbrus is a large stratovolcano composed of layers of lava and volcanic ash. It has a conical shape with two peaks, located approximately at the same height. West summit of Elbrus stands at 5642 metres above sea level, the Eastern slightly lower at 5621 meters. Vertices separated by a gentle saddle height of about 5300 meters above sea level and is located three kilometers from each other.

Elbrus is considered to be an extinct volcano but the last eruption occurred not so long ago from a geological point of view – in the beginning of our era, about the first or second century.

There are several versions about the origin of the name of the mountain. One of them, "El" means "high mountain" or "shining mountain" in the Iranian language. Karachays and Balkars, which has long been resident in the territory of Caucasus, near Elbrus volcano, this is called Mingi-Tau, which translates as "eternal mountain".

Caucasus mountains are divided into two parts: major and minor Caucasus. The greater Caucasus mountain range passes on the border of Russia with other southern countries (Georgia, Azerbaijan) from the Black sea to the Caspian sea. The territory of the Big Caucasus on the Russian side is divided into several republics and provinces: Adygea, Karachay-Cherkessia, Kabardino-Balkaria, Dagestan, North Ossetia. Elbrus is on the border of Kabardino-Balkar and Karachay-Circassian republics.

A few kilometers South of the foot of the volcano the border of Russia with Georgia.

The mountain is located in the Northern part of the ridge at a distance from the other vertices, so it is perfectly visible from all sides of the Caucasus – the two-headed cone is visible even a hundred kilometers. Elbrus is the border between the Central and Western Caucasus. The Western part of the mountain system runs from El'brus to the black sea coast, Central lies between that peak and MT.

The volcano is surrounded by several gorges Adylsu, Adyrsu, Shkhelda glacier massifs and mountains. The area at the foot of mount Elbrus in the upper reaches of the Baksan river, which is part of the Terek basin, called the Elbrus region. This is a resort area and a preserved area with a unique natural beauty, sources of curative mineral waters and excellent opportunities for skiing and Hiking holidays.

The border between Europe and Asia is not precisely defined, and if you count the border of the Caucasus range, Elbrus is the highest point of Europe. Otherwise, this title belongs to Mont Blanc in the Alps.
Is the advice useful?
Присоединяйтесь к нам
New advices