Whether to swing the Japanese branch of medium tanks?

An overview of the new Japanese branch of medium tanks in World of tanks. Compare with other classmates and the discussion of effectiveness in battle. 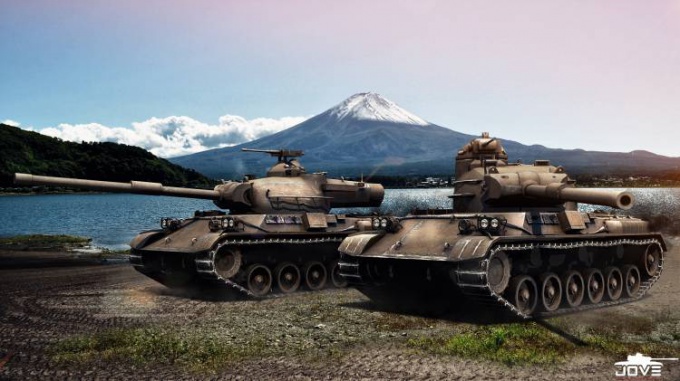 Related articles:
Not so long ago released a new branch of the Japanese tanks led the STB-1. Many ask the question: "in General, do I need to download?" I'll try to answer this question.
I started to pump the "Japanese" as soon as they appeared. Moreover, that was an action for "Masters" with a prize in the form of game gold. To be honest - I managed to get one "for free" 500 gold is good too.
I must say that up to level 8 I "the Japanese" did not like. Maybe only LVL 6 Chi-To is more or less consistent with their level. They have no armor, weak dynamics and low penetration and damage per hit, making the gameplay very challenging, especially for inexperienced players.
That LVL 8 tank STA-1, already begins to rejoice. The main advantage is the high penetration of basic shells(218мм), saving the silver, even in high-level battles. Also, the tank has excellent gun depression(hereafter, the IOC) that makes it even easier to use excellent penetration of the enemy by showing only the tower. However, we should remember that armor almost no and break all the tanks that fall in battle in any projection. Is that the mask sometimes gets no penetration. Especially dangerous bombs artillery that can penetrate STA-1, even in the forehead with a bunch of "crits" that complicates the game, given the not very high dynamics of the tank. Comparing with classmates, we can say that STA-1 is very good. The manner of playing it is comparable to the us Pershing. The only difference is a better dynamics, larger sizes and a better gun. We can say that the STA-1 is one of the best medium tanks in its tier and is able to "drag" the battle at the top of the list.
Next is at level 9 Type 61. I must say, the tank I really liked it and I consider it the best St at level 9 on par with the T54. What's it good for? He is the owner of the unique weapon. But the most interesting stock. The one which is on the STA-1. So pumping up to the "top" gun is not so burdensome. This "cannon rate of fire up to 12 rounds per minute! With the rammer and the brotherhood of the CD is around 4 seconds, allowing you to simply perestraivat any enemy, and sometimes even two. The only disadvantage of the weapon is a relatively low penetration, which kompensiruet premium shells. Well, the main highlight is the "top" gun with a break 257мм with which to break the "head" almost all the tanks in the game(aiming especially armored) without using "gold". KD is about 8.5 seconds and an alpha of 390. Game on Type61 can be compared with the American Patton. The only difference is that the Japanese are better at everything. He had better penetration, the same average damage, higher damage per minute, the same gun depression, better dynamics. However, again it is worth remembering thin armor and large sizes. Although, bombs are not so punch as his younger brother, but still full damage from arty" may disappoint. In General, a tank I really liked, as the top of the list you can "drag" virtually any fight. Still Type61 breaks any classmate that allows you to use auto-aim, moreover, that "Japanese" great stabilisation on the move, and personally, I used to have them. Great tank in the right hands and is capable of much even in the bottom of the list. The main thing not to go ahead and play on the second line or hillocks or hills using the IOC.
And finally, the crown of branches the long-awaited Japanese STB-1. Tank mixed. He has many huge advantages and huge disadvantages. Let's start with the good. STB-1 has one great plus - crazy DPM. He can just shoot any St LVL 10, except for the French "drummer" of course. The interval between shots with the "alpha" 390 rammer, brotherhood and ventilation is of 6.6 sec. Even T62-A, which was previously out of the competition nothing can oppose the "Japanese" in the melee. However, there is one "But". The gun has a too long mixing 2.7 seconds. and you'll be "COSATU at long and even medium ranges, so PDM is not always possible to implement in full. The advantages also include excellent dynamics, UHV and low profile with high disguise that allows sometimes "parastatal" and "Shine". Bad moments will provide the same trailing "gun" still weak armor for a level 10. Although the tower is rikoshetnoy, but it has a bunch of weaknesses that fly breaks the shells. Though, 8 levels will give ricochete not only from towers but also from the body. The tank is unusual and before the end of its potential has not been studied. It is best to use it in uzvodno the game with other ST when you can make full use of his PDM in the melee, and take into account its dynamics can be "carousel" enemy TD and heavy tanks.
Is it worth to download the Japanese medium tanks up to You. Personally, I liked the 8-10 levels. Play them interesting as tanks without armor the best of all shows real skill.
Is the advice useful?
See also
Подписывайтесь на наш канал