How to cook cold soup?

Cold borscht, or made very popular in the Baltic States, Belarus, Poland and some regions of Russia. In Russia since ancient times was preparing a cold soup with fish, not just fresh, but smoked. In Udmurtia, for example, I love summer soup mushroom soup with croutons. 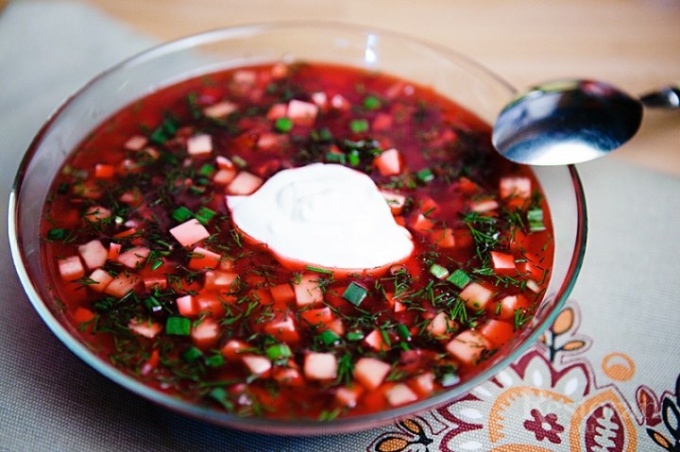 Related articles:
Summer cold soup is prepared differently in different countries and regions of Russia, it gives an opportunity to feel the uniqueness of each dish. The taste of kholodnyk change the ingredients that make the recipe different from the others. For example, the Lithuanian cold borscht is almost the same as customary in Russia, but serve it with hot razvarnaya potatoes with butter.

Friedge is considered Lithuania's national dish. In the summer it is on the menu all the cafes and restaurants.

Green onions and parsley must be finely chopped. Bit of chopped greens can be left to feed, the rest put it in a pan. The greens in the pan a little salt and crush with a spoon, in order to reveal its aroma and to soften the texture.

Beet and cucumber RUB on a coarse grater. In the pan with the greens, add the beets, cucumber and yogurt, mix well. The eggs, or chop and add to the pan, or cut into halves and put each in a bowl.

If the yogurt is sour, you need to mix it with sour cream. Beets can be pickled for use in banks, but if beet brine is not too acidic.

A pot of kholodnyk to put on 5-6 hours in the refrigerator. Serve with boiled potatoes and sour cream.

Recipe of the usual cold soup, which is also called beetroot, are not much different from Lithuanian recipe, only in number of ingredients, and sometimes add sausage or ham, and yogurt diluted with sour cream instead of yogurt. The water in which boiled beets and leave while it's still not quite cold, take out the beets, peel and cut it into small wedges, and add some vinegar and sugar. Then put the chopped ingredients to pan with beet water and pour dressing as desired.

Summer in the heat, a cold vegetable dish with dairy products and fresh greens are nice and helpful. And how beautiful it looks on the table! Colors on the table will be added, if put next to the dish with different greens and radishes.

Udmurt summer mushroom soup with croutons, very tasty, but it is not cold. However, in the Udmurt Republic is also preparing a cold soup based on kvass-type hash from the young leaves and stems of herbaceous plants, which is called cow parsnip. Only in this soup do not put in the hash, potatoes, cucumbers and meat.
Is the advice useful?
See also
Присоединяйтесь к нам
New advices