Why not bloom peonies

Beds of lush peonies will brighten up even the most nondescript suburban area. Cut flowers look great in bouquets that stand a long time at home. If you properly care for peonies, they will delight in its splendor at least 15 years. However, it happens that the plants in the new flower bed bloom. In some cases you just need to wait, and sometimes the flowers need immediate help. 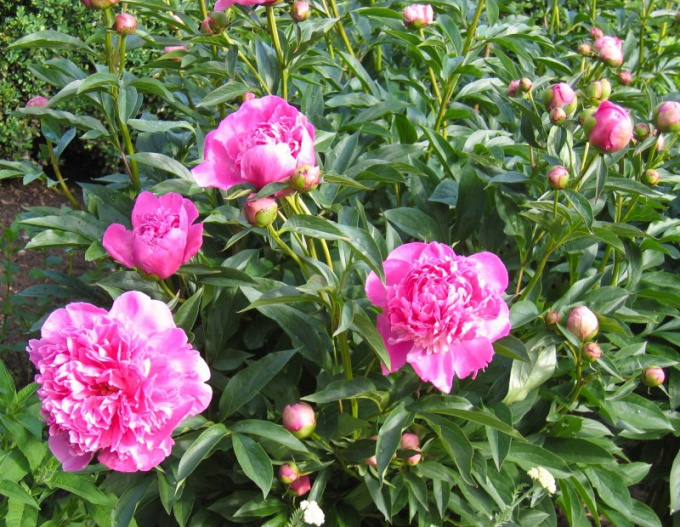 If you only a year ago, we put peonies on your site, don't expect they'll bloom. After planting, the plants need to take root, grow tall stalks. Often the buds bloom only in the second year, however, the peonies should not spend their strength for flowering. Your task is to help the young plant to grow at least 3-x-6-high stems. The first of the buds have attained a diameter of about 8 mm, recommended to cut.

Planting material it is advisable to purchase from the experienced florists or flower shops and greenhouses to buy to find out if all the features of a particular variety. Some of the peonies (for example, some hybrids, dairy-flowered varieties and a number of red) first bloom only in 3rd and sometimes in 4th year. But what if it took 4-5 years after planting, the bushes look healthy, but don't produce buds?

Beginning of flowering peonies depends on the climate zone and variety. Some plants are spreading the buds from the end of may, in June, encouraging other flowers, even in mid-summer. If the Bush is planted in shade, flowering time will recede.

You need to check whether planted flower beds. Distance from the uppermost buds of the rhizome to soil should be approximately 4 cm in loam and 6-7 on light soil. The roots of perennial built up the top and after weeding may seem from the ground. The fit should be neither too small nor recessed. Carefully atrebate the ground under the plant, check the feature landing and adjust the position of the rhizomes: remove excess soil or pricopie peony.

Not happy with flowering peonies, growing close to other plants with powerful roots or Foundation of the building – they cannot develop normally and receive enough nutrients. At the end of summer will have to dig up the flowers and make them out of standard segments rhizomes about 20 cm, with 3-5 kidney. Need to replant the peonies in a place where a lot of sun, but is protected from strong winds.

Experienced growers know that a beautiful flowerbed can be grown only from young plants, because after transplantation of adult plants forms a full root system. Maybe you used a weak or poor quality planting material. Whatever the reason why your peonies don't bloom for quite a long time after planting, wait until the end of August, dig up and transplant the plants to a new location.

Perennials have ceased to bloom: help the peonies

It happens that peonies several years to delight you with lush color, but one year does not give flowers. This may be several reasons. The most obvious one wrong cut peonies for bouquets. As emphasized by the growers, it is necessary to remove not more than 1/3 of all stems, and leave the bottom leaves, because it is at the base of the shoots takes place the formation of new buds.

Another possible reason that peonies don't bloom – the depletion of the soil. These plants are hard to consume meals with appearance of the first sprouts. After each flowering is necessary to make liquid fertilizer in a ring around the ditch, peony, and well-watered flowerbed. However, follow a simple rule: perennials a bit better to Supplement than to pay too much fertilizer otherwise the bushes will be juicy and powerful, but buds will not be pleased.

Recommended feeding for pions (at 1 m):

The reasons for the cessation of flowering peonies may be gray mold. Usually the disease affects plants at the top of summer. Often this happens due to the fact that the entire terrestrial part of the faded peony cut off, not waiting for late autumn. If the plant is sick, in late April, 2 times with 10 days intervals should be sprayed with a bed fungicides. Among the least toxic means of a solution of potassium permanganate at the rate of 3 g per ten-litre bucket of water, or colloidal sulphur (60 grams per bucket).

Some gardeners carry out prevention of Botrytis from pions by spraying landings infusion of crushed garlic (1 teaspoon on 1 l of water).

Peonies may not bloom once just because they got old. Preferably every 8 years to rejuvenate the bushes. To make it better in late August – early September. You should dig up the roots, remove the soil with a wooden peg and allow it to lie on the ground for 3 h. the Stems are trimmed to 10 cm in height. Young parts of the rhizome and roots with a diameter of about 4 cm need to cut them out, and damaged, old and sick to remove. To create a new flower bed, and constantly take care of your peonies – and they will make you happy.
Is the advice useful?
See also
Присоединяйтесь к нам
New advices