Lights for the garden solar powered with motion sensor

Convert daytime sunlight into electrical energy has long been a reality, the equipment operating on solar batteries, mounted on space stations and in residential homes. And while in Central Russia the sun is not enough to fully provide electricity to your cottage, it would be enough to ensure its evening lighting. 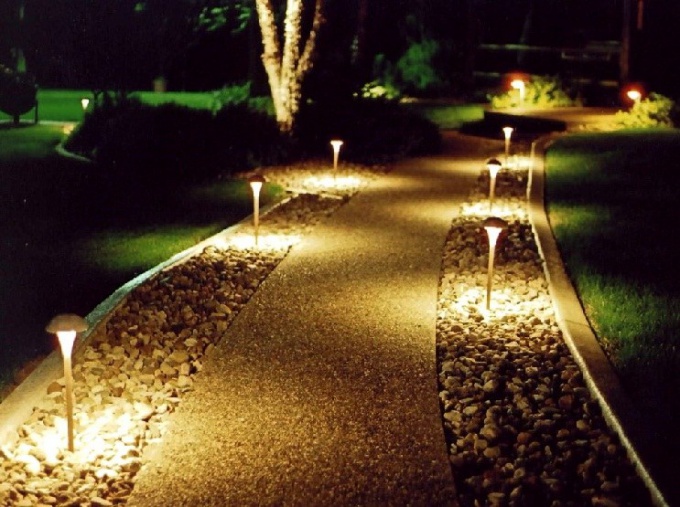 Such lamps can be of different size and shape, but the design they have will be the same. At the top of the lamp, where gets greatest daylight, and placed a thin film covering the surface of the solar battery. Falling light, it converts into electrical energy that is accumulated by the accumulator in the light throughout the day, even if it was cloudy. After it becomes dark, the lamp is switched from the voltage supplied by battery, lights up led lights mounted under protective clear bubble.

Garden lamps, equipped with motion sensors, can perform the alarm function, illuminating the appearance of any person in the field of their action.


The advantages of solar-powered lights

Features and benefits of using led lights, powered by solar light on the garden and suburban areas is obvious. First, it is free electricity, and secondly, these lights do not require the tabulation of cable – no need to dig the ground and lay there leads, thirdly, to set this lamp in any place, even in a remote place, in additional frequent maintenance and repair it is not needed.

Night lighting and illumination of the suburban house are fraught with the opportunity to bring to life the most fantastic designs that will help to completely transform the area at night to highlight the architectural features of the buildings, to make them more expressive of the surrounding landscape. If well-placed led lights of different sizes and shapes on the site and around the walls of the country house, in the evening you can enjoy no less spectacular views than those that are pleasing to your eye in daylight.

But manufacturers of lamps powered by solar batteries, continuously working on improving their design to expand functionality while saving accumulated electric charge. They are equipped with not only the touch devices, responsive to the amount of incoming light, but also infrared motion sensors.

How does the motion sensor

In the operation of motion sensor uses electronics that respond to infrared radiation constantly emitted by the human body. As soon as a device detects an object that emits heat, it sends a signal to the device that is connected to it, in this case, the lamp. The lamp is activated by a signal received from the motion sensor, and turns off after the received signal about the absence of an object emitting infrared radiation. Led lamp, which in operation is much cheaper than xenon, and do not require large amounts of electrical energy, ideal for use with motion sensors, which significantly increase their energy saving features.

Garden lamps, equipped with motion sensors, can perform the alarm function, illuminating the appearance of any person in the field of their action.

Lighting system led lamps with built-in motion sensors and powered by solar panels – the best option for street lighting on country and garden sites in areas which do not require constant illumination. They can be equipped with a Parking area, paths leading to farm buildings or utility buildings, footpaths, paved between the garden beds. In such lighting systems is possible to combine several lamps which can operate together or be included consistently.

Led bulbs turn on in an instant, resistant to vibration and fluctuations in temperature and humidity.

How to choose a lamp with motion sensor

If you want to set in a country house, their selection is wide enough, in such big cities as Moscow, you can buy them in any store, and in remote areas it is possible to order them on the Internet, examining consumer reviews on the forums. Pay attention to models in which the solar battery panel is a separate module that allows you to install it in the most illuminated place, and the lamp – where it is needed.

In addition, given that these devices are non-repairable, you should choose a lamp from a known, trusted manufacturers that will be reliable and will not break after a month. The quality of workmanship can testify even the packaging – it should contain technical features: power of led lamps, their number, type, pressure sensor and battery, its nominal capacity. It is better to choose a lamp with Nickel-metallogidridnyh the battery, it cost more expensive Nickel-cadmium, but more economical because it will last longer and can provide more power.
Is the advice useful?
Подписывайтесь на наш канал