How to cook soup of crucian carp

Ear is one of the oldest dishes of national Russian cuisine. Try to cook her carp. Despite the fact that there are a lot of small bones, high compared to other inhabitants of fresh waters the content of nutrients and amazing flavor makes this fish a perfect choice for cooking hot soup. 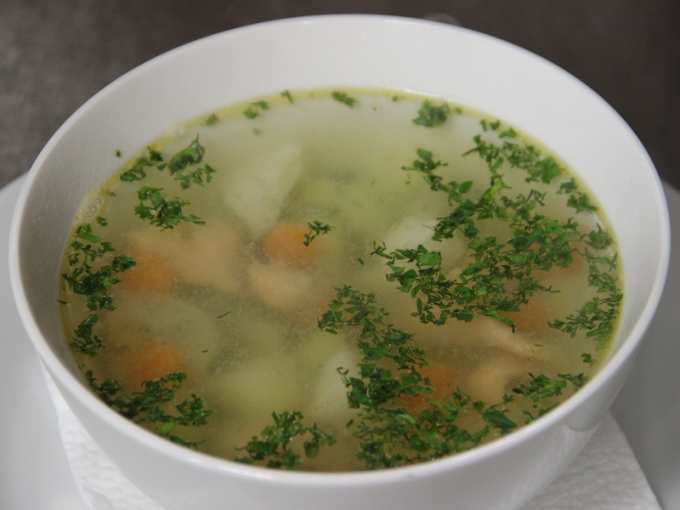 Related articles:
You will need
Instruction
1
A simple soup of crucian carp

Carp wash under running water, clean off the scales, cut the gills, fins and tails, remove the giblets and again thoroughly wash the fish. If you got eggs, don't throw it away, and put in a bowl and save. Attached to the end of the cooking in soup it will give it a beautiful amber color and slightly lighten the broth.
2
Cut fish head and cut each carcass into 2-3 cross piece. Put all in a saucepan, cover with cold water and place on high heat. As soon as the liquid boils, lower the heat to medium index and collect the resulting foam with a skimmer.
3
Remove the husk of the onion, cut it crosswise in half and dip in the soup. Cook carp 15-20 minutes, then remove the boiled head of the vegetable and discard. This way you will give the broth a desired taste and smell, but the pieces of onion will not swim in it, creating an unsightly picture.
4
RUB the spawn in a mortar and put it in your ear. Season the dish with pepper, Bay leaf, chopped dill and salt. Cover pot and simmer fish soup for another 15 minutes.
5
Soup of carp with vegetables and millet

Prepare the fish as in the previous recipe, boil, carefully remove from the broth and set aside.
6
Clean the vegetables and cut them the potatoes and onion – diced, garlic – in small pieces, carrots and celery – straws or on a coarse grater. Wash the millet several times and douse it with boiling water.
7
Lay potatoes, carrots, onions and celery in boiling broth, boil again and stir in grits. Simmer the soup for half an hour, then give him pieces of carp, toss the garlic, both kinds of pepper and Bay leaf, and salt to taste.
8
Cook a fish soup of carp for another 7-10 minutes on medium heat, remove from heat and let stand for a bit. Pour hot meal on plates and sprinkle with chopped dill.
Is the advice useful?
See also
Подписывайтесь на наш канал