How to knit with different colors of thread

Multicolor crochet patterns are very diverse. This can be a combination of stripes or a cage with raised crochet vertical lines. Knitting can be knit and intricate ornaments. Thus there should be no nodes, no extra loops. Order multicolor pattern turned out beautiful and elastic, there are a few tricks. 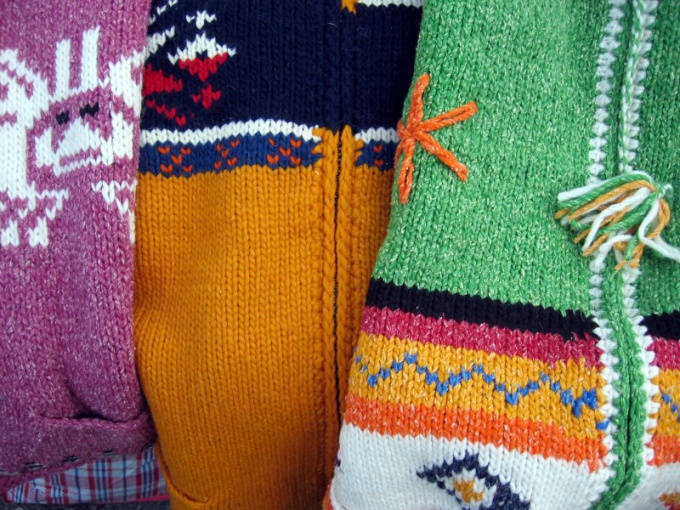 Related articles:
You will need
Instruction
1
If you are just learning to knit, start with combinations of bands. Transitions from color to color, in this case exactly the same as when knitting a Norwegian ornament or imitation embroidery, but they are made in the beginning of the row. For convenience, denote colors of thread, for example, numbers. Let the main color will be # 1 and continue in order. Davaite the product before the first strip. Attach the thread to another color. At the beginning of the pattern, simply bind to the knot was on the wrong side. Thread the main color don't tear off. The edge loop on the transition, do not remove and provarite thread color number 2. Knit stripes. The last row will end where it started. Route the cable along the edge of the thread number 1, wrap it one or two turns around the threads # 2 and knit the next stripe of it. Edge also tie.
2
The figure in the box most convenient to do using the lift loops of a different color or crochet needle. First, tie a few strips. Close the loop. Mark the beginning of knitting into equal segments. Attach the thread from the second skein to one of the marks. If you're going to do it with a needle, then rewind the thread around 2 times longer than the height of the product. Pass it to needle and embroider vertical stripes loopy seam, just follow the contours of the loops of knitting. The same can be done with crochet.
3
For vyvazhivanija ornament or imitation embroidery choose the right pattern. For starters it is better to take the one where each thread vymazyvaja a small field. Davaite before the start of the pattern. Attach the thread from the wrong side, trace around the threads of the base color that they hooked to each other, and knit by the scheme. Similarly, go to the threads of the third colour. When the need arises again to go to the base color, pull the right thread on the wrong side of the work, circle it around the threads of the pattern and continue to knit on. To cross threads need to ensure that the pattern was not pulled together.
4
For vyvazhivanija big picture with large color fields will use a different method. For example, a knit, two-tone pattern need in this case is not two balls but three. Divide the ball of the main color on two. Davaite before the start of the pattern, mesh threads exactly the same as in the previous method. So crochet the necessary amount of loops of thread of a different color, but when going again to the basic tone of the thread on the reverse side do not stretch, and attach the thread from the second skein. Flip the work, davaite this thread to the edge of the picture and hook the strands to each other on the reverse side. Provarite a number of pattern, then go to the main thread from the first ball. That thread is not tangled, put each ball in a separate little basket or a baby bucket.
Is the advice useful?
Присоединяйтесь к нам
New advices