How to make a bracelet out of yarn

Baubles of thread worn in the era of fascination with the hippie movement – and continue to wear till now, despite the fact that the hippies are mostly gone. Bright bracelets of threads, symbolizing joy and friendship, attract many, and are a great gift for friends and relatives, but also unusual decoration, suitable for any outfit. Learn to weave baubles is simple – for this you will need embroidery floss in assorted colors, scissors and a pin. 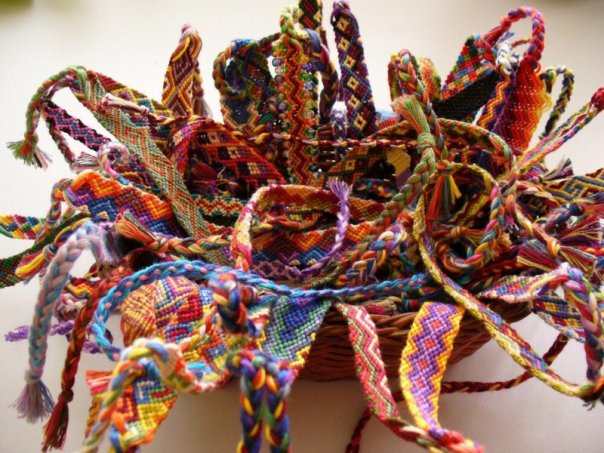 Related articles:
Instruction
1
Cut eight thread floss assorted colors, length four times the expected length of the bracelet. Tie the thread on the knotted end and secure with a safety pin on a pillow or the back of the sofa.
2
Distribute threads next to each other as will have to go after each other colors of thread in the bracelet. Your first working thread – the extreme left. Tie this thread to the next thread on the right, double knot.
3
Continue to tie double knots all the threads until your working thread will not appear on the extreme right. You wove the first row of baubles, along with a series of diagonal knots. Go back to the thread, which was on the extreme left, and repeat the above steps – objazyvaet thread from left to right by double knots.
4
Having finished a row, go back to the extreme left of the thread and start to tie knots. Continue to braid bracelet until it reaches your desired length, and then at the end tie a knot and weave the braid for the drawstrings.
5
Having mastered the simple weave diagonal lines, you can complicate the task and to try to weave a bracelet with a pattern "herringbone". To do this, begin to braid in the usual way, but stop exactly on the middle of the baubles, and then continue to weave the extreme right thread from right to left, making the mirror nodes.
6
Thus, on the left you will have a diagonal line in one direction, and the right in another. Lines will form in the area in the centre of the baubles. A Central thread tie a knot.
7
Continuing to weave baubles to the end, you will receive a bracelet with a repeating pattern "herringbone".
Is the advice useful?
See also
Подписывайтесь на наш канал