How to learn the map of the world

Map — an excellent tool for the study of geography and other disciplines. She will always help on the exam, because the use of maps is not forbidden. But in order for a map helped in a difficult situation, you need to learn to read and also to remember that the main thing that it is. 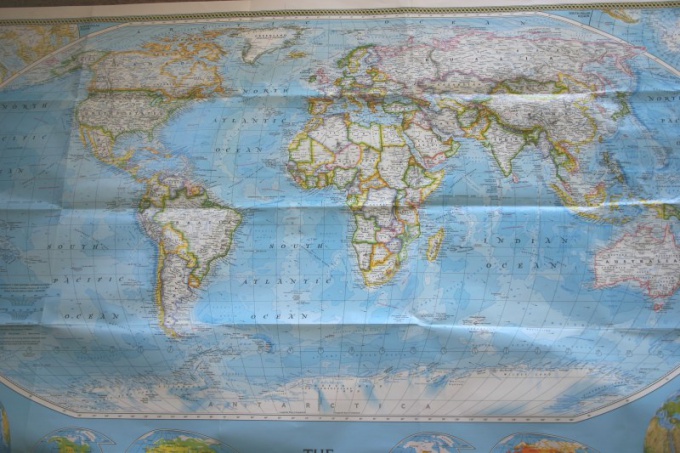 Related articles:
You will need
Instruction
1
Hold e-cards. It is possible to quickly determine the coordinates of the area or to calculate the distance between settlements. They can even find a very small town. But easier to remember the location of objects on a conventional paper map. Start with maps of the hemispheres.
2
Consider both hemispheres and read what the Western and some Eastern. Read the names of the continents and memorize them. Learn to identify cardinal directions. All paper maps with North at the top, South — bottom, East and West, respectively, left and right. Remember the basic horizontal line and the equator and both poles. Find where is located the Greenwich Meridian. Viusid, what are the continents and oceans crosses each of these lines. Locate the equator, the Greenwich Meridian and the line of poles on the contour map.
3
Consider the map of the world. Find on it the main lines that you've already seen the map of the hemispheres. Identify the part of the world. Remember what it looks like every continent. Use visual memory and Association. What is it like in Africa or America? What is different from the rest of Eurasia, Australia, Antarctica? Where they are relative to each other? Find the continents on the outline map. Label them and compare with the printed map.
4
Locate on the political map of the world their country. It is most convenient to start it, because you know and capital, and its approximate position on the mainland, and the States which it borders. Find them and memorize their position in relationship to your country. Learn the names of capitals and other major cities. Near some water bodies they are?
5
Compare the political map of the world with the physical. Learn the symbols. What are the important geographical objects located on the territory of your country and neighboring? Identify the position of major cities in relation to these objects..
6
Find on every continent of the extreme points and learn them. Show the greatest country. Determine its coordinates. Find its approximate position on the physical map and identify the most important geographic features. Show the country in the neighbourhood, the largest rivers, the major mountain peaks in their territory and major cities. Note the border between the States. On what objects they are?
7
Take any book of a world tour. Show the route that was chosen by the expedition. Search on the map of the world main points. Run this job several times and find the route of the expedition on the contour map.
Useful advice
Check yourself on the map. Type in a search engine the name of the continent, then find it needed points and view their coordinates.

Use different types of memory. Show on the map the direction of flow of the river, the shore line, the location of the city or vertices. Call objects.
Is the advice useful?
See also
Подписывайтесь на наш канал