How to tie the blanket to the cats

After sterilization, the cat needs to wear a blanket so she wouldn't raspisal remaining after the operation the stitches. Horsecloth cat walking on average 1-2 weeks, while the owners have from time to time to remove the blanket, to process the seams and then put on again. The problem is that veterinarians not always explain how to properly wear these clothes for cats. 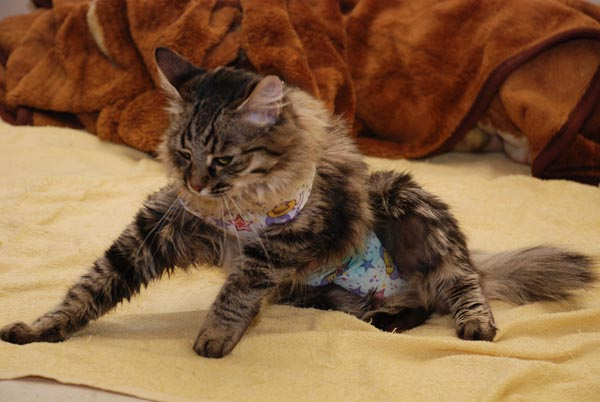 Related articles:
Instruction
1
I put the blanket on the cat, be very careful. After the operation the animal feels not the best way, therefore, the faster and less painfully you will wear a blanket, the better. To suit a cat better together. First spread the blanket, straighten all the straps. Determine which side of the blanket should be tied around the head, and some near the tail. Make it easy: front drawstring located significantly further apart than the rear.
2
Put the cat on the blanket. One person should hold the animal, and the second tying the blanket. Please note that the fabric must cover the body of the cat from the bottom, and tie – fixed on top. First, tie the two front straps over the animal's head, then take the second and third in a row of ties on each side (a second should be placed in front of the front paw and the third behind it) and tie the second left, the third right and second right third left. The blanket should be tightly encircle the torso, but in any case do not push. Pay attention to the cat's paws: they should move freely without getting tangled in any strings, or in cloth blankets.
3
Further, the link between the fourth and fifth ties on each side (fourth fourth, fifth fifth). So you fix the blanket on the trunk. In the end it should be the last four straps – two on each side. Sixth tie should be placed in front of the rear paw, and the seventh followed her. Tie the hind legs as well as tied front, i.e. crosswise (left the sixth with the seventh right, right, sixth from the left seventh). The tail should be between the last right and last left plot. Check whether the bound hind legs, not to be confused with the drawstring or fabric. Finally, release the cat and let her walk a little around the apartment. Initially the cat will be uncomfortable to move, but eventually she will get used to the blanket.
Is the advice useful?
See also
Присоединяйтесь к нам
New advices