How to distinguish a fake 1000 rubles

Sometimes people are not aware that some money in their purse can be a fake. And for good reason – it is better to detect fraud on time and on their own, it will make the seller at the checkout. Besides to distinguish a fake 1000 rubles is quite simple. 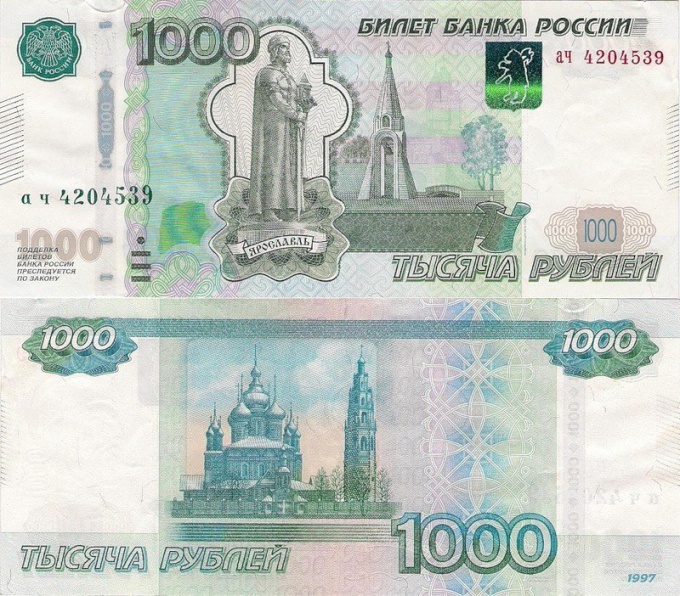 Related articles:
Instruction
1
First determine what material is made the bill. A real bill of 1000 rubles is made on special multi-layer material. Fakes are also often printed on paper.
2
Touch the bill. The edges should be felt small touches, and the text "the Ticket of Bank of Russia" a bit of relief. It is made for people with low vision, so this bill you should easily experience these signs.
3
Slightly tilt the bill. The original bill has a glossy horizontal bar in the center of the emblem of the city of Yaroslavl. When you change the angle, the strip will move from the center up or down.
4
Inspect the security thread that reaches the surface of the paper. When you tilt the bill, you should see some numbers or "1000" with a diamond between them, or just rainbow glitter.
5
Find the solid green field. If you tilt the banknote, the original should see a yellow and blue strip – how would continue colored stripes dark area of the field. Also these bands are visible under ultraviolet light.
6
Consider the bill up to the light. You should see the portrait of Yaroslav the Wise, lighter than the bulk of the bills (he is on the right on the front side, next to him is a light watermark – "1000").
7
On the back side of the banknote there is a dark number "1000", alternating with diamonds. Consider this plot to the light: should be bright on a dark background.
8
Place the banknote against the light and look a little below the coat of arms of Yaroslavl. On this banknote you will see the inscription "1000", consisting of many small holes. To the touch to find them is impossible.
9
Look at the banknote of 1,000 rubles through a magnifying glass or a magnifying glass. On the front side above and below on an ornamental ribbon, you will see a few lines of tiny text. This is quite a clear sign this bill because counterfeiters usually this text is not added.
10
By increasing the same obvious that the building on the obverse (near the chapel) is composed of several small elements.