How to cook a Turkey drumstick

Turkey drumstick refers to red meat and is a great alternative to chicken legs. Its taste is reminiscent of the game and requires a lot of time for cooking. 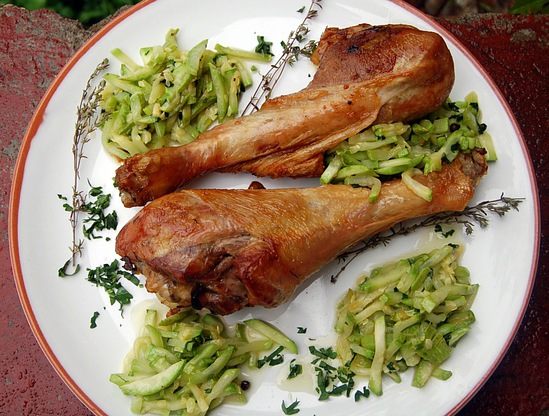 Related articles:
You will need
Instruction
1
For cooking Turkey with vegetables take 2 drumsticks, wash and dry them with paper towels. Will peel one medium head of garlic, all cloves cut in half. RUB the drumsticks spicy mixture of 2 teaspoons salt, 1 teaspoon of red pepper and same amount of white pepper.
2
Make in meat cuts and fill them with garlic. In refractory form, pour a little vegetable oil and place drumstick. Put the form in heated to 200 degrees oven for half an hour.
3
Prepare vegetables. To do this, wash and slice in a bowl large cubes 1 small eggplant and zucchini. 300 grams cherry tomatoes whole put. Season vegetables with salt, Basil, paprika and oregano to taste, pour in one tablespoon of vegetable oil and mix.
4
Put the vegetables in the legs and reduce oven temperature to 180 degrees C. Continue baking for about another hour, and then cover the form with a lid and leave for 20 minutes to juice evenly distributed around the dish.
5
Cook the Turkey in mustard sauce.

To do this, take 2 drumsticks, wash and dry them. RUB the meat with salt, pepper, and coat with a thick layer of mustard on all sides. Slice two onions of the onion half-rings.
6
Put the drumsticks in a pan with a thick bottom, to overlay them with onion, and 5 peeled cloves of garlic. Pour 200 grams of dry red wine and same amount of chicken broth. Put on fire and cook under a cover on moderate fire for one hour.
7
Bake the Turkey in foil.

To do this, grate two of the prepared tibia of the Turkey with a mixture of salt and pepper. Put them on one portion of the foil sheet. Clean 400 grams of potatoes and cut into slices of medium thickness, sprinkle with salt, pepper, Basil, paprika and oregano to taste.
8
Overlaid drumsticks potatoes, cover with foil, tuck the edges and place on a baking sheet preheated 180 degree C oven. Bake for 45 minutes, then open the foil and increase the temperature to 200 degrees C. once the potatoes are browned – turn off the fire.
Note
Lemon juice — 1 tbsp, Turkey drumstick — 1 piece, soy sauce — 1 tbsp, vegetable oil — 50 grams, sauce "Worcester" — 1 tbsp
Useful advice
Turkey drumsticks 2 PCs, carrots 1 piece, onion 1 piece Bay leaf 2 pieces, a mixture of peppers, peas 1 pinch allspice 2 pieces... Recipe Turkey drumsticks baked in the oven with step by step photos. Drumstick Turkey enough...
Is the advice useful?
Подписывайтесь на наш канал