How to make ham

Dry-cured pork ham jamon – the Spanish national dish. The recipe has been known for over two thousand years and years in the production of this meat delicacy, nothing has changed. 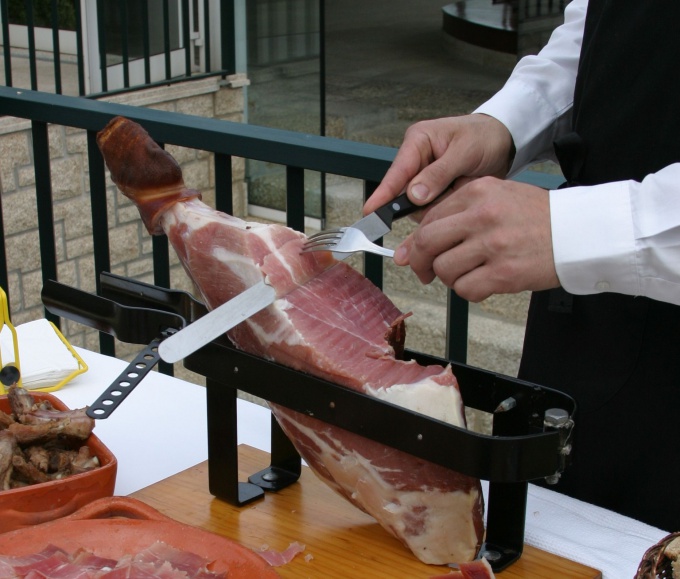 Related articles:
Instruction
1
Select haunch of 1.5 – 2 year old pigs. There are two main types ham,and "Serrano" and "Iberico". The main difference is not in method of preparation, and from a breed of pig they cooked and what the pig was fed. These pigs can be distinguished externally by the color of the hooves – it is white the breed Serrano, and black – Iberico.
2
Pour pork roast a large quantity of coarse salt. Salt penetrates into the muscle tissue, helps to dehydrate the meat, preservation and appearance of the characteristic odor and color of dried product. Keep the ham at a temperature of from 1 to 5 degrees Celsius with a relative humidity of 80 – 90%. The time of salting, the hams are on average one day per kilogram. Rinse the ham from the remains of the salt with cool running water. Leave a pig's foot for 2 days at a temperature of about 30 degrees Celsius for water runoff.
3
Soak the meat in the refrigerating chamber at a temperature 3 to 6 degrees Celsius and a relative humidity of 80 – 90% within 35 to 45 days. This method ensures an even distribution of salt and moisture removal from muscle mass.
4
Hang the ham vertically for drying. Gradually raise the temperature to 15 – 17 degrees Celsius at one degree every week for 90 days. And the humidity is reduced to 70 – 75%. Dehydration of the meat and continues the process of exudation, the grease penetrates between the fibers of the muscle tissue.
5
Leave dried ham to Mature in the cellar at a temperature of 8 – 10 degrees Celsius. Jamon is necessary to sustain not less than 12 months, but not more than 42 months. It is at this stage of drying under the influence of the microflora of the ham acquires its inherent texture, taste, and smell. To feel specific aroma, testifying to the readiness of the hamand the ham is pierced with a thin long needle, made from cow or horse bones.
6
Cut ham slices (slices) sharp, thin, long knife, by placing the ham on a special stand – hamERU. Cut grease with melted fat to prevent drying of meat. Ham is served as a snack, added to soups, salads, main dishes and even desserts.
Useful advice
The darker slice of ham, the moisture in the meat less.
Is the advice useful?
See also
Присоединяйтесь к нам
New advices