How to buy weapons in counter-strike

Counter - Strike is the most popular multiplayer shooter. The essence of the game consists in a confrontation between two groups, one of which represents the law (SWAT) and terrorists. Beginners in this game can be a lot of issues, the most relevant of which is the purchase of weapons. It's easy to do, but some guns prefer? 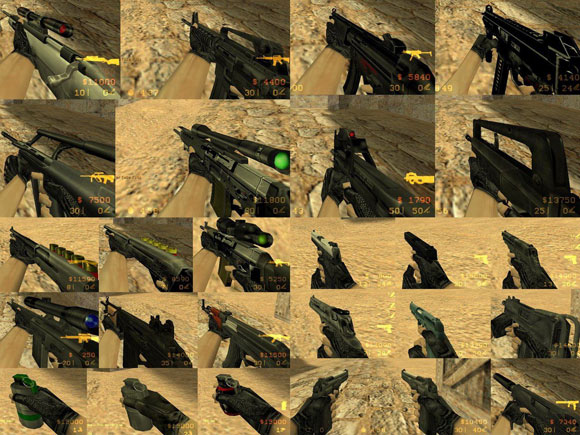 Related articles:
Instruction
1
Then start the game. Create a new or join an existing one. After waiting a few moments, you will be taken to the menu of choice. Your choice will depend on the list of suggested weapons. After that, choose the skin of your character.
2
Proceed to purchase weapons. This can be done with the button “B”. After clicking on it a menu appears buy weapons. There are several categories of firearms, one category of equipment. The first category is guns. To select it, and click on the numeric keyboard the number "1". You will see a list of available pistols. To buy a weapon, click on it with the mouse cursor. Otherwise you can click the number which will match the number of weapons in the list. Thus, buying a gun “Desert Eagle” will be carried out with the combination “B,1,4”.
3
Examine the weapons menu. The next category of weapons is activated, when pressing "2". In it you will find two guns. Then there is the category "machine Pistols". They are relatively cheap, but in the hands of inexperienced players ineffective. Some have low accuracy, other low rate of fire. There is also a difference between different teams. Terrorists have "Uzi" special forces has a rapid–fire submachine gun with a silencer. Category "machine Guns and assault rifles" are the most popular and players. Here you will find a Kalashnikov (terrorists), M16 assault rifle (special forces), a sniper rifle. The last category of weapons presents a machine gun destructive power.
4
Buy equipment with the help of the button “O”. This will save valuable time while procuring on the "spawn". Then press the numbers that correspond to a particular gear. It can be light grenades (flash), shrapnel, smoke. You can buy yourself a bulletproof vest, a set of field engineer (special forces). Remember that at the same time you can only take two flash grenades, one frag, one smoke.
Note
In General, the law is estimated by experts as rather clear and competent, but, nevertheless, in society there are constant discussion and criticism of this document – primarily around one question: whether to remove restrictions on the sale of rifles handguns and thus finally be armed? Try to figure out how to buy weapons.
Useful advice
How to buy a gun?According to the Law "On weapons" – the main document that defines the legal circulation of weapons in Russia, next week marks six years. To obtain this knowledge by the correspondent of "CM Number one" went to the gun shop. How to obtain a license? – To buy weapons you need three things, – says Dmitry Glushkov, Director of the gun shops "Bayard" and...
Is the advice useful?
Присоединяйтесь к нам
New advices