How to determine the time on the clock

The first mechanical clock with a dial and pointers were of the tower, and residents of medieval cities was not necessarily know how to determine time with them. It was enough to count the number of strikes – because of the advent of the new hours proclaimed the fight. Today, although widespread electronic clock, learning to tell time looking at a mechanical clock, once did not. 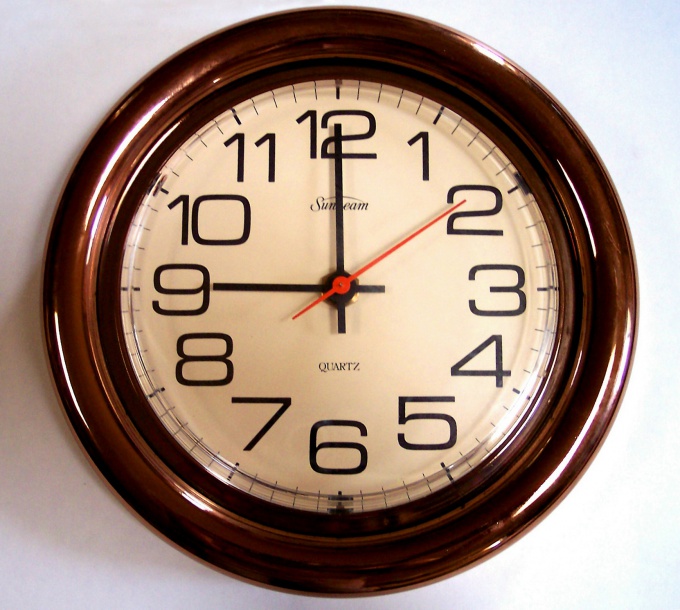 Related articles:
You will need
Instruction
1
Determine which of the arrows plays a role of hour, what minute, and what counts seconds. The easiest way to "identify" second hand – it moves quickly, and track its movement on the dial can easily. The minute hand usually thinner and longer time, the latter is the most massive and short.
2
Note, the level numbers printed on the edge of the dial is the hour hand. The last digit (Arabic or Roman), the level which it had reached, and indicates the number of whole hours that have passed since the beginning of the day. If the arrow is between two numbers, so another hour has gone, but it has not yet expired.
3
Please note now, at the level of some markers is hand minute – at the place position you can find out how many minutes this hour has expired, and how much – still left. The distance from one number to the other is five minutes of time distance between smaller segments within five-minute intervals – one minute. Accordingly, if the minute hand is, for example, at the level of the number "three", it means that the hour has passed fifteen minutes, from twelve to one to five, from one to deuce – five, but from two to "three" five – fifteen.
4
Correlate the readings of the hour and minute arrows and get an accurate indication of the current time of day which may be added the testimony of the arrow used, reckoned on the same principle a compound fraction of a minute. Remember that seconds hands is supplied not all of the analog watch.
Note
In order not to obtain incorrect information about the current time of day, try on a subconscious level to distinguish between the hour and minute hands and not confuse them with each other.
Useful advice
Remember that in a clock – mechanism, maintenance and adjustment, so if their work was for some reason broken, and the data obtained then using them will be wrong.

Having the basic skills of determining time using a mechanical clock, try to bring their skills to automaticity – practice to "catch" the clock, whose glance on the position of the hands in relation to the circle of the dial, not looking at the numbers.
Is the advice useful?
See also
Подписывайтесь на наш канал