How to connect the led to the battery

Simplest led flashlight consists of led, resistor and battery. In some cases, is not required and a resistor. Such a lamp is less effective than more complicated, equipped with a transducer, but low price and speed of Assembly pay for this deficiency. 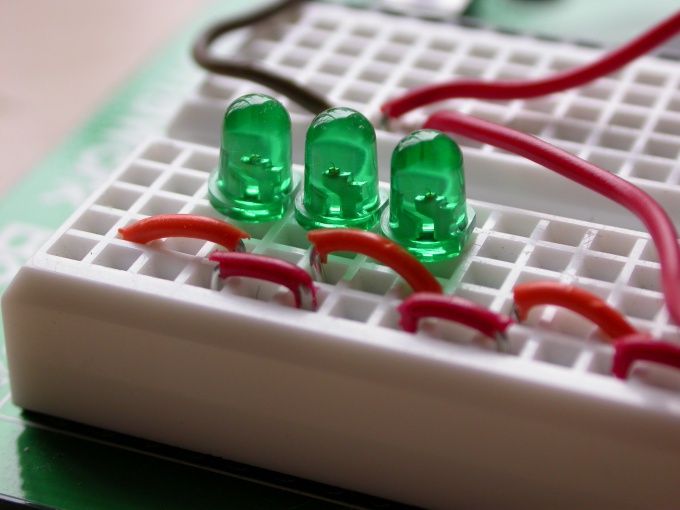 Related articles:
Instruction
1
Find the voltage drop across an led depending on its colour according to the following table:- red: 1.9 In;
- yellow or green - 2.1 V;
blue or white - 3-4 V.
2
If you do not know the color of the led, briefly connect it to the lithium battery size 2016, 2025 or 2032. At the same time you will learn the polarity of the conclusions of the led, trying to connect it both ways. The element marking is applied on the positive electrode with a larger size. LEDs having a body (that is not implemented in the SMD version), this battery can be connected without any resistor. In any case do not short circuit the element.
3
If LEDs having a body, you are going to use a lithium cell, size 2016, 2025 or 2032 or three series-connected miniature zinc-manganese cells, size LR41 (L736, AG3), the resistor can not be used. To power from the same power sources SMD-diode it is recommended that a resistor of about 30 Ohms. When using three elements of the brand AG13 (LR44) is the same resistor will have to deliver consistently and with a corps led.
4
Sometimes the lights of industrial production to power blue or white LEDs include sequentially two 2016 batteries without a resistor. To do so is impossible, because it will lead to a rapid deterioration of the diode and the discharge element.
5
When you connect the LEDs to the power source, consisting of batteries of size AA or AAA, resistor use mandatory. If the led is red, yellow or green, you will need two cells in series, if the blue or white three.
6
The resistor initially take a resistance of 100 Ohms. Measure the current through the diode, and if it is more nominal, increase the resistance, if less, decrease. For diodes, rated current of which is unknown, choose it equal to 10 mA (for lighting LEDs with a diameter of 3 mm), 20 mA (for lighting larger diameter) and 3 mA (for SMD or any indicator).
7
Then measure the voltage drop across the resistor, multiply it by the current consumption, and get released on it power. If necessary, increase the nominal power of the resistor, pre-rounding it to the nearest value of the standard series.
8
Be sure to equip the lamp with a switch, adding it in series.
Is the advice useful?
See also
Подписывайтесь на наш канал