How to calculate resistance for LEDs

Today, LEDs are used everywhere: in the quality indicators, elements of lighting, pocket torches and even traffic lights. There are thousands of models of these devices. On their basis in the home is easy to build and entertaining device. LEDs are sold in shops of radio components. Unlike incandescent lights, they cannot be connected directly to the power supply - the LEDs fail. Need a current limiting resistor. Therefore, the question of how to calculate resistance for led stands up immediately before using it. 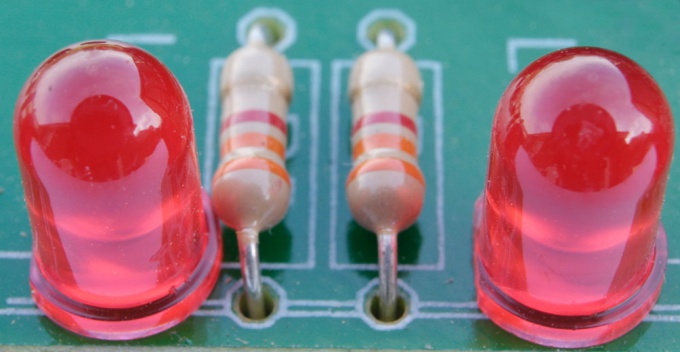 Related articles:
You will need
Instruction
1
Find out the electrical parameters of the used led. To calculate the resistance of a resistor, it is necessary to know the forward voltage and the rated current of the device. Knowing the model, in the Handbook or on the web, find the required parameters. Make a note of them.
2
Determine the supply voltage from which is powered the led. If the power source assumes the use of the galvanic cells or accumulators, find out their rated voltage. If the led must be powered by circuits with large voltage tolerance (for example, electricity car), determine the maximum circuit voltage.
3
Calculate resistance for led. Perform calculation according to the formula R = (Vs - Vd) / I, where Vs is the supply voltage, Vd is the forward voltage of the led and I is the rated current. Pick the nearest value larger than the resistance in one nominal series resistance. It makes sense to use a number E12. The tolerance in the nominal values for resistors, this number is 10%. So, if the calculated value of the resistance R = 1011 Ω, as a real resistance must be set to 1200 Ohms.
4
Calculate the minimum required capacity of the quenching resistor. Calculate the value according to the formula P = (Vs - Vd)2 / R. the values of the variables Vs and Vd the corresponding values of the previous step. The R value is a resistancecalculated earlier.
Note
Do not turn on the LEDs in parallel using a single damping resistor. Due to the natural variation of parameters of the devices, some of them will have an increased load, which can cause of their failure.
Useful advice
If the model of led is not known, it is possible to use a resistor with variable resistance for experimental determination of the required value.
Is the advice useful?
See also
Подписывайтесь на наш канал