How to draw the star of Bethlehem

One of the brightest symbols of the Nativity of Christ is the star of Bethlehem – an unusual celestial sign that pointed to the traveling path of the Magi to the manger where Mary gave birth to the Baby Jesus. The gospel is not described the details of this phenomenon, but Church tradition has established a certain picture of this wonderful star. The frescoes and icons of her are drawing an eight. There are other options, such as chetyrnadcatiletnie star in the Church of the Nativity in Bethlehem. But don't confuse it with a six-pointed star of David. 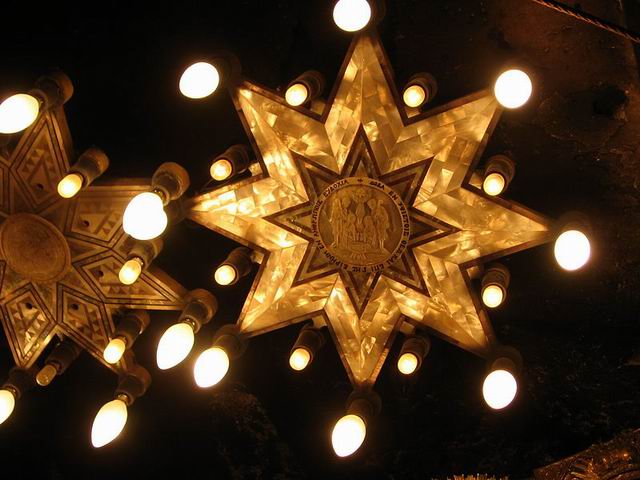 Related articles:
You will need
Instruction
1
To draw a Bethlehem star, build first octagram – eight-pointed star-shaped polygon. Draw on the paper square, and then draw equal to a second square rotated about the same center at 45 degrees. The eight vertices of the intersecting squares are the ends of the star of Bethlehem (Fig. 1).
2
Now consistently connect these vertices via two one self-intersecting continuous line. Remove the contours of intersecting squares and the extra internal lines of the resulting eight-pointed star, leaving only the contour lines.
3
Below the star was shining more interesting and slightly extend some of its rays (e.g., one). You can make the faces of the rays are not straight, and notched, toothed.
4
Paint the outline of the star of Bethlehem yellow paint, warm colour. Give volume to the star's rays from its center draw straight lines in each of the eight vertices, and connection points of the beams by dividing them into halves.Do this with a thin brush with yellow paint darker yellow-orange hue. Fill one of the resulting halves of each beam is the same paint.
5
As mentioned in the gospel the star of Bethlehem was moving, pointing the way to the Magi, many people tend to consider it a comet. So often this star is depicted with a long curved tail.Draw with the side of stars extending to the end of the loop as at a comet. The end of the tail, you can make a zigzag or wavy line, and you can gradually reduce it by coloring picture.
6
Paint the trail of the star of Bethlehem yellow paint, and yellow-orange make a few strokes along it, showing the motion of the unusual heavenly body. Closer to the star base you can make a texture of small thickly studded with points, and by the end of the tail – from more sparse.
7
In conclusion, trace the outline of the star shape gold paint or a marker, and apply across the surface of small strokes and dots. Do the same with the plume of the star of Bethlehem.
Is the advice useful?
Присоединяйтесь к нам
New advices