How to win in baptized-TAC-toe 5 in a row"

"TICTAC toe"is a favorite of both children and adults, first, it is not time consuming, and secondly, develops logical thinking, and thirdly, it requires no special equipment – just the piece of paper and a pen. The rules are simple: two players take turns to fill the cells of the playing field one crosses, the other noughts, and the field may be limited, for example 3x3, 4x4, 5x5, etc. or unlimited. The winner is the player who first fills his pieces horizontal, vertical or diagonal row of the field on the unlimited winner is the one who will build a continuous line of 5 figures. 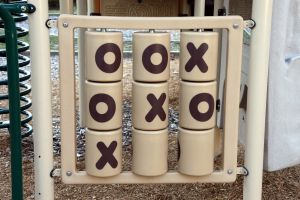 Related articles:
Instruction
1
A game called "5 in a row", it is more complicated than the conventional "TICTAC toe". From a tactical point of view playing the TIC should actively attack, because he makes the first move, and playing toe – to block the attack and try to seize the initiative. You can play it as an unlimited field, and on the Board 15x15, this is a version called Gomoku.
2
The main winning tactic in the game "5 in a row" is to build a "fork", i.e. crossings which do not allow the enemy to build five, in this case, the probability of winning the novice player. However, the construction of a number more than 5 is not a win. At the same time, there is one limitation in the rules: the first player puts his figure in the center of the field, and then both players can put their symbols arbitrarily, while the second player can change the color.
3
There is also a variation of Gomoku with great restraint. It is called Renju. In it to offset the advantage to the player making the first move, it is forbidden to build a "plug" 3x3 and 4x4, as well as to build more than two forks and create long chains of figures. In this case, the chances are aligned, because the second player can "play for the foul".A loophole in the rules of Renju is that any player can refuse to make the next move, if it considers it unprofitable. If both players pass consecutively, the game ends and is declared a draw.Game Renju can last either until the victory of one player or a draw, or until the whole Board is occupied by rocks, which is unlikely, in practice such cases are extremely rare.
Is the advice useful?
See also
Присоединяйтесь к нам
New advices