How to make a wedding video

Wedding video is the perfect way to capture the beauty and history of the celebration. It's not only the visuals in motion and with sound, it's a real feature-length film of the event with music and special effects. Video will always preserve the magical moments of the ceremony, and, thanks to the directing to the editing, the movie will be interesting. If you do not intend to go to a professional videographer (although it is better not to save), you can shoot and edit a wedding on their own, using simple tips. 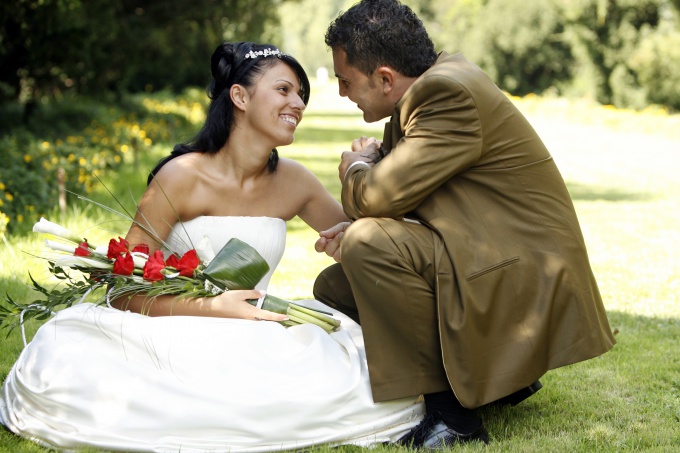 Related articles:
Instruction
1
Start taking pictures of the wedding from preparations of the bride. Take everything she puts on, wears a dress and shoes, the hair. At the same time in the memory you'll embody girlish bride's house, where she lived until her marriage. The same is podseti and the groom: the process of atwienia shirt, choice of tie, shave and a Shoe Shine. Mount is the beginning of a wedding film is the easiest way to clip the music. Then the scene will not be tight, dynamic and fun.
2
Redemption will be given not less attention. We can say that the wedding has already begun. Remove everything from the entrance of the wedding car to the house before the presentation of the bride in and out of the doors. The video was not lengthy and tedious, the installation without pity cut longueurs, slurred competitions and tasks for ransom, and in some places, the video and all you can do it in 2-3 times to give a comic effect.
3
The young in the registry office, but the videographer should arrive there before the others to make podsypku the arrival of the wedding procession and Grand entrance of the newlyweds car. During the wedding ceremony will need a tripod, because the marriage to last at least 20 minutes, and the camera cannot be turned off even for a second, so if you forget the tripod, you'll need to keep at arm's length. Remove one point near the table of the Registrar. Keep lens with individuals bracadale, allowed only a gradual approximation of the camera in the moment of putting on rings and kiss. Wedding dance also shoot in one shot, slowly skirting around the couple, zooming in and out camera from them. If you got it all right, without shaking hands and sliding joints of the frame, this part of the ceremony of installation and does not require. Unless you can slow down the frame and put romantic music in the moment of the kiss and the ceremonial drinking of champagne.
4
Walk young is a mandatory part of the film. You have to follow the bride and groom, to lead them to put mini-scenes in nature, the Museum, monuments, etc. Remove them from the bottom, top, side, play with the frame, lay lying on the grass, forced to swing on the swings and run over the bridge. In General, become a full Director. Than hudozestvennie you shoot, the better you will get a wedding film. Installation of this part will require skill and patience. Here you can overlay video for all your special effects, sprinkle a few roses and stars, to add bells and angels. And sure, all scenes mount with romantic music clip, cutting, choosing only the brightest, best and most beautiful of the captured.
5
In agreement with the bride and groom removed the Banquet. Usually this shoot is the hardest part of the operator's work. Endless greetings, series of gifts, kisses and a standing master of ceremonies, competitions and dancing. To remove it all is so exhausting that the operator-Amateur after the first shot throws the camera and joins in the General merriment. Professional afford can not. Congratulations everyone freaking out enough to capture the words of the parents of the bride and groom and close friends, as well as the final announcement of the total money and gifts. Of the contests is to remove only the most vivid and iconic: the bride, the dance of the young, selling cake, etc. Installation all that is even more tedious. If you are not a professional, just cut longueurs, remove empty frames (shooting table, slurred contests, greeting distant relatives, line, and rhymes Toastmasters). Reduce this part as much as possible, otherwise, to revise it entirely then it would be impossible.
6
To complete the movie music video, picked from the best shots of the entire wedding film. Mount the to music the newlyweds a kind of short - wedding in a compressed form, taking a couple of shots of redemption, marriage ceremony, trips, Banquet and wedding dance young.
Is the advice useful?
Подписывайтесь на наш канал